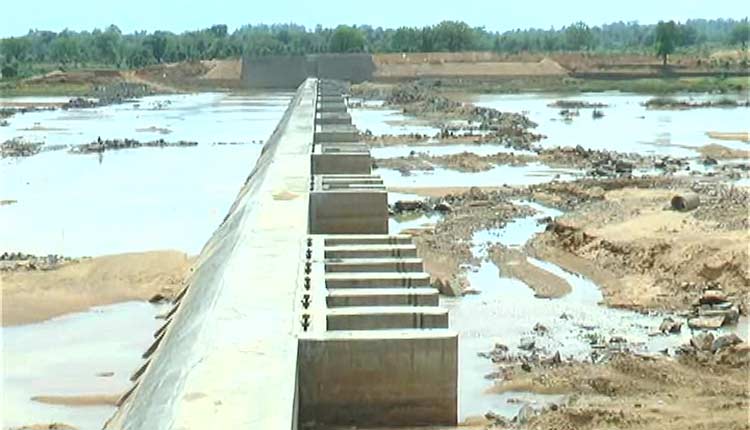 Bhubaneswar: Construction of an anicut (check dam) by the Chhattisgarh government on Ib River near Samdama in Sundergarh district has sparked concerns among the local people especially farmers who now worry that the project might throw their livelihood into uncertainty.

The check dam project being commissioned at a cost of Rs 17 crore has 40 gates and will have the capacity to obstruct flow of 95.8 per cent of flood water, much to the inconvenience of the farmers.

Ib river which is a tributary of Mahanadi river is said to be the lifeline of residents of Sundergarh and Jharsuguda. People of the region have expressed concerns that if the water level in the river decreases, the two districts will reel under acute water scarcity.

In 2015, OTV had highlighted the issue when the tender for the project was floated by Chhattisgarh government. The project also witnessed stiff protest from residents of Sundergarh who had observed district-wide bandh to protest the move.

However, while the district administration as well as the State government reportedly turned a deaf ear to the issue and now the completion of the project has sparked widespread resentment among the public.

On the other hand, Sunderarh district administration expressed ignorance over the anicut project. When contacted, the district collector refused to comment on the issue citing that it is a state-level matter.

Citing their apprehensions over the project, Girish Sahu, an advocate and resident of Sundergarh said, “The project will have a serious impact as Ib river is the lifeline of Sundergarh. Farmers will face irrigation problem while Sundergarh town will experience drinking water shortage. The Odisha government should hold discussion with Chhattisgarh government immediately and resolve the issue,” said.

Speaking on the issue, Sundergarh MP Jual Oram also opined that the Odisha government should hold high-level talks with its Chhattisgarh counterpart in the matter.

An anicut is a masonry check dam that is constructed across a stream to impound water for maintaining and regulating irrigation. The water stored behind an anicut can be used for irrigation of crops or drinking water for humans and livestock.