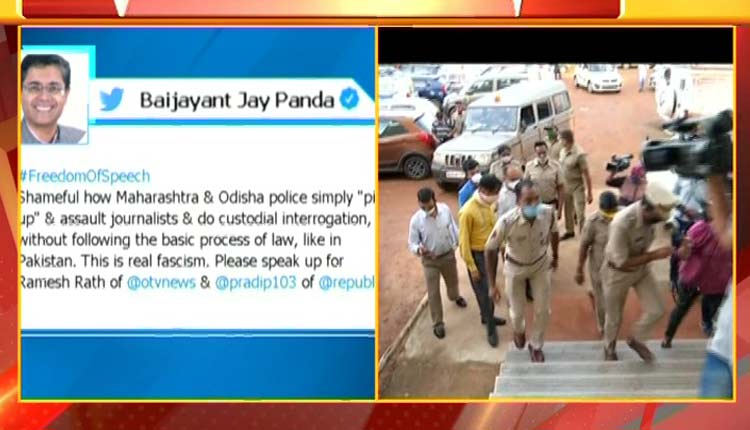 In a tweet, Panda said, “Shameful how Maharashtra & Odisha police simply “pick up” & assault journalists & do custodial interrogation, without following the basic process of law, like in Pakistan. This is real fascism. Please speak up for Ramesh Rath of @otvnews& @pradip103of @republic.”

#FreedomOfSpeech
Shameful how Maharashtra & Odisha police simply “pick up” & assault journalists & do custodial interrogation, without following the basic process of law, like in Pakistan. This is real fascism. Please speak up for Ramesh Rath of @otvnews & @pradip103 of @republic

However, Panda’s tweet that called for freedom of speech did not go down well with the ruling Biju Janata Dal (BJD) MPs and MLAs in Odisha.

“Nothing more shameful than comparing your own state with Pakistan. Colossal disrespect for the Odia culture and the people of Odisha,” tweeted BJD MLA, Pranab Prakash Das.

Nothing more shameful than comparing your own state with Pakistan. Colossal disrespect for the Odia culture and the people of Odisha. Hope better sense prevails and this of insult for the people of Kendrapara, the entire state stops here! https://t.co/NpgsYvz6qS

Responding on the issue, BJP’s state general secretary Prithviraj Harichandan said, “Jay Panda has just given an example. I had also recently posted that that media and the RTI activists are being targeted by Odisha government which is not justified. The law and order situation has gone for a toss and many such things will be brought to public domain by media and RTI activists which is their duty.”

Harichandan further stated that the Odisha govt should restrain from such kind of activities.

Later in another tweet, the office of Baijayant Panda stated that the ruling BJD is trying to push false propaganda.

“Jay Panda has not compared Odisha with Pakistan, rather he said that both Maharashtra and Odisha police are behaving like the police in Pakistan. BJD is trying to twist the meaning,” tweeted the office of Jay Panda.

“Actually, we have seen cases, I have seen it in Maharashtra recently with the journalist, Pradeep Bhandari and in Odisha the journalist, Ramesh Rath where the police are being misused by the local governments there for their political purposes. They are picking up journalists without warrants, raiding premises without warrants. Custodial interrogation requires certain rules to be followed that are not being done. This is highly politicised. You may not like a particular channel or what they are saying they may be very loud and obnoxious but that is what freedom of speech is about. And in both these cases, certain nexus are being exposed. In Maharashtra, arrests have been made based on some the exposes made. In Odisha, there is massive scam of hundreds of crores of rupees from Covid money sent by the Union government to the State. Once this is being exposed, the State governments are cracking down on these journalists. I have also made the point that this should not happen in a constitutional democracy like India. In place like Baluchistan and Pakistan, we hear about police behaving like this without following any rules, without any due process of law, they pick up journalists and take them away, assault them, torture them. The fact that these sort of things beginning to happen in India is horrible. And other thing I would like to point out. This is specially for those, so-called liberals who often return their awards and they make allegations against BJP-run states. There is a fundamental difference. In BJP-run states, invariably if somebody is detained, he will find the court has authorised it, warrants have been issued or bail has been denied whereas these instances in Maharashtra and Odisha are just the opposite where blatantly disregarding the court process, blatantly disregarding in some cases bails have been given people are being physically picked up. This is real Fascism, it must be opposed,” Panda said in an interview to ANI.