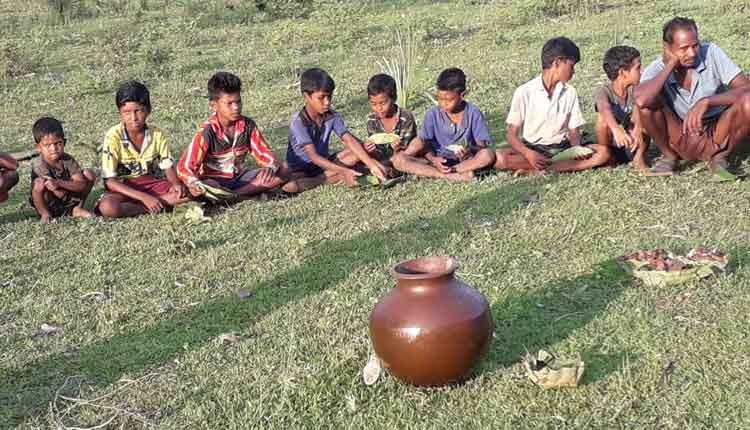 Malkangiri: Despite relentless efforts to spread awareness about the COVID-19 pandemic, superstitions and false belief about the virus still rule many interior pockets of the State. Corroborating the fact is a recent incident reported from Odisha’s tribal-dominated Malkangiri district where children were seen waiting in line to consume local sal liquor to prevent themselves from getting infected with the coronavirus disease.

More than 50 children in the age group 10-12 were seen sitting in line and consuming local‘salap’ liquor in a bid to prevent novel coronavirus at Parcelpalli village under Padia block here. The video of the incident has also gone viral on social media.

Despite relentless efforts to spread awareness about #COVID19, superstitions about the virus still rule interior pockets in #Odisha. An incident from Malkangiri where children were seen consuming country-made ‘salap liquor’ to prevent SARS-nCoV infection is a testimony to it. pic.twitter.com/qAsRVRvLkm

The district of Malkangiri, so far, has reported 306 COVID-19 cases out of which 145 are still active. While 161 have recovered, the district has zero fatality due to the virus.

It is worthwhile to mention here of the disbelief that consuming spurious liquor can cure coronavirus, has claimed hundreds of lives in Iran.

The western Asian nation reported more than 700 deaths between February and April this year after people started consuming spurious liquor to cure the virus.

According to Iranian Health ministry, more than 5000 people have been a victim of alcohol poisoning of which around 90 people lost their eyesight or suffered a damage to the eyes.

Double Murder Over Sorcery In Jajpur, Another Brutally Tortured In Malkangiri

Youth Hacked In Bhubaneswar Over Past Enmity