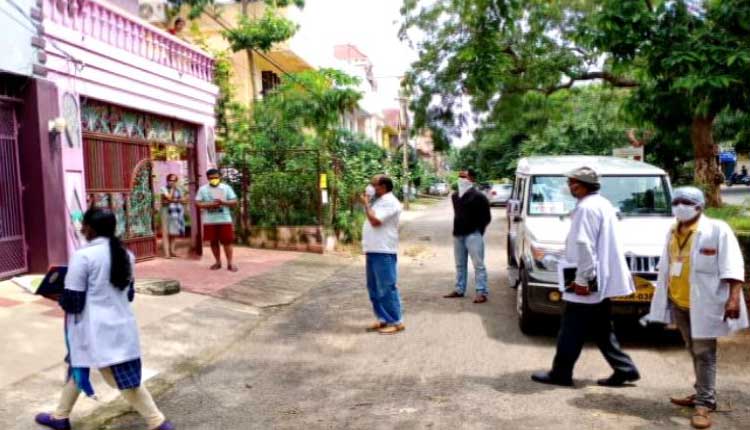 Bhubaneswar:  After Ganjam, the capital city is giving sleepless nights to the state government with COVID-19 cases rising relentlessly in the smart city. Despite lockdown, sanitisation and other containment measures, the authorities have failed to put a brake on the spread of the virus as the city reported 850 cases so far this month.

The capital city reported 332 cases in June. However, by mid-July the tally witnessed nearly a four-fold rise taking the number to 1182. With the city reporting 850 cases in the last 18 days, possibilities of community transmission cannot be ruled out, experts cautioned.

If the number of coronavirus cases reported in last five days is taken into consideration, the city registered 413 new cases out of which 163 are local transmission. Bhubaneswar reported 90, 60, 124, 87 and 52 cases from July 15 to July 19 respectively.

“We are failing to perform contact tracing of local COVID-19 patients. Our aim and focus should be on how to avoid community transmission,” said Ashok Mohapatra, former director, Bhubaneswar AIIMS.

Meanwhile, Bhubaneswar Municipal Corporation (BMC) is leaving no stones unturned to curb the spread of the virus. With an aim to spread awareness and conduct thermal scanning in slum areas, BMC has formed a COVID Awareness Team comprising 1400 volunteers.

Similarly, to ascertain the chances of community transmission, BMC has started serological survey in 25 wards of the city. Around 5000 locals will be tested in the survey, which is being conducted in two phases.

“In the primary phase, we have performed serological survey in which 900 people were tested. Among them, 15 tested positive for the coronavirus which is less than two per cent. So there is no community transmission in Bhubaneswar,” said Dr Jayant Panda, technical spokesperson for the health department.

BMC additional commissioner Surath Chandra Mallick said, “During lockdown, we will focus on highly contaminated area. Our primary focus will be on asymptomatic cases.”

Notably, till July 19, Bhubaneswar has reported 1182 cases and the virus has claimed 11 lives in the city.