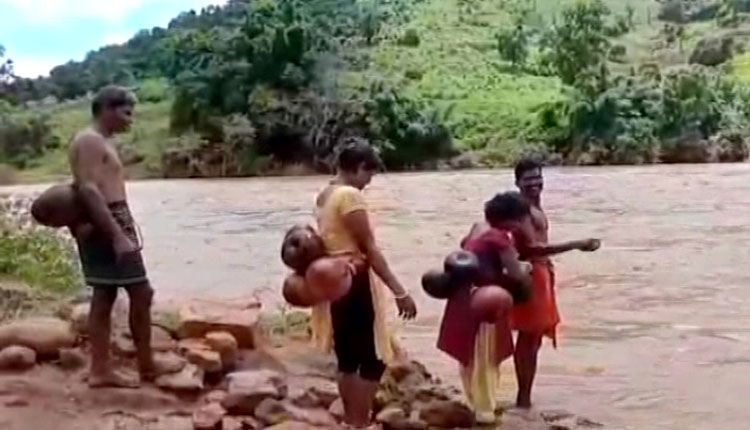 Malkangiri: The plight of two Anganwadi workers, who would swim across a dangerously flooded river to reach upto their workplace in Malkangiri district, has moved business tycoon Anand Mahindra.

While responding to a Twitterati, who had posted a video of the two Anganwari workers- Hemalalta Sisa and Pramila Penel of Raniguda Pachayat under Chitrakonda village—crossing the flooded river, noted industrialist and Chairman of Mahindra Group, Anand Mahindra, has offered to donate an inflatable boat.

Yesterday was a ‘marine’ day for me: tweeted about a cycle that works on water & about patrol boats built by Mahindra Marine. But this story is heart-rending. Hiten, would one of our rigid inflatable boats be of use to that community?Can we consider donating one from CSR funds? https://t.co/LhFKiom4PH

It is pertinent to mention here that both the Anganwadi workers used to tie up dry pumpkin shells and empty pots across their waist as floats while crossing a flooded river for attending their duties due to lack of proper means of connectivity, including boats.

Both Hemlata and Pramila had to risk their lives to visit Sualipali and Nerudi villages by crossing the flooded river.

The video of such perilous attempt by the Anganwadi workers had recently gone viral on social media. OTV too had telecast a report on the incident.