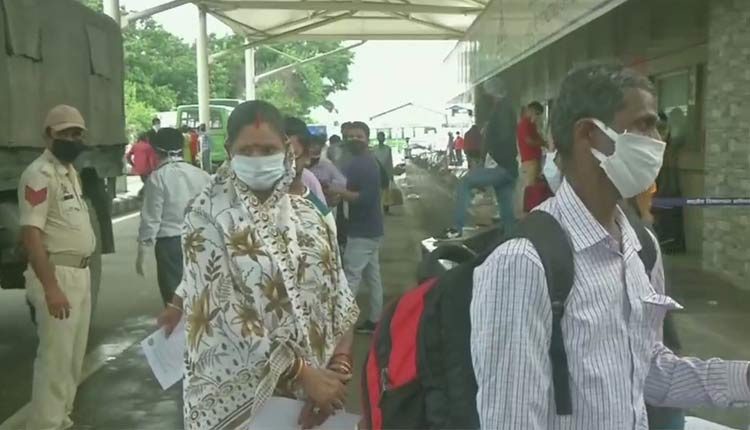 Jammu/Bhubaneswar: As many as 366 stranded migrants left for Odisha on three special flights from Jammu on Sunday, thanking the Naveen Patnaik government and the Jammu and Kashmir administration for making arrangements for their return, officials said here.

The migrants, mostly labourers, were picked up in State Road Transport Corporation (SRTC) buses from various parts of the city shortly after sunrise under the supervision of Additional Deputy Commissioner, Jammu, Tahir Firdous and taken to the Jammu airport, they added.

“The first flight, carrying 122 passengers, left for Odisha around 9.30 am, followed by two other flights with equal number of passengers each at 10.20 am and 11.30 am,” an airport official said.

Firdous, who was present at the airport during the departure of the passengers, said the Odisha government had arranged the three special flights for its residents.

“We facilitated their smooth travel to the airport from their rented accommodations and ensured that they do not face any problem while boarding their flights,” he said.

The officials said all passengers were screened by a special team of doctors.

“They are the ones who have expressed their desire to return to their home state due to the coronavirus-driven lockdown,” he replied when asked how many Odisha residents were still living in Jammu.

Santosh Bodah, one of the migrant workers, thanked the Odisha chief minister and the Jammu and Kashmir government for facilitating their return.

Bodah said they had been eagerly waiting to return for over two months now.

“The lockdown rendered us jobless. We were facing tremendous hardships in meeting our daily needs and were desperate to return,” he said before leaving the Pacca Danga area of the city for the airport along with 45 others.

Bodah said he was happy to return home to be with his family in the present crisis and would take a call on coming back to Jammu for work at an “appropriate time”.