Tiger conservation in Odisha has been an unmitigated disaster since the last two decades! It is common knowledge that tigers are disappearing in the state despite vast forest coverage and comparably a low human population.

Is Bollywood in decline?

Small babus with deep pockets: The growing menace of corruption in Odisha

National Language War: Time For A Rethink On Language-Integrated India

Around 14 years ago, a press conference was hurriedly convened by the Odisha Forest department at posh Bhubaneswar hotel to explain the “misconception” that Odisha has lost a huge number of tigers in Simlipal Tiger Reserve. The camera trap based census in Simlipal conducted by the Wildlife Institute of India had blown off what was one of the worst kept secrets of Odisha.

Until 2006, the department had reported 192 tigers in Odisha including Simlipal which held a minimum of 101 tigers. However, the 2007 census blew off the lid of the worst kept secret. It revealed 30 tigers only, a shocking decline of 71 tigers in one year! Ofcourse not a single media person believed the state government’s incredulous claims.

The then Park Director Dr. Debabrata Swain who later on was promoted to the post of Member Secretary  of the National Tiger Conservation Authority (NTCA) had claimed tigers of Simlipal are shy and hence all may not have been captured by the cameras! Tiger conservation in Odisha has been an unmitigated disaster since the last two decades!

The Sleek Hunters Of Barbara!

The Incredible Wildlife Of Odisha

It is common knowledge that tigers are disappearing in Odisha despite vast forest coverage and comparably a low human population. With chance of seeing a tiger in our forests now at an all time low, I recollect my last tiger encounter in our forests many years ago when I visited Sunabeda WLS in search of a rare owl.

This journey was to a remote part of our lovely state. Nuapada district lies at Odisha border with Chattisgarh. I had never visited the much talked Sunabeda Wildlife Sanctuary (not Koraput) and was looking forward to see the place.

I love travelling in the forests during monsoons. We were driving up the ghat road after passing the Cherchuan check post of Sunabeda Wildlife Sanctuary. As you approach this little known patch of wilderness spread over approximately 600 sq. kms you will be struck by the layout of the land. It has a remarkable resemblance to a large loaf of bread placed atop a dining table. The forested plateau of Sunabeda abruptly juts out of the flat rolling dry plains.

I enjoyed the bone jarring drive on the washed out ghat road with exposed rocks. Every year post monsoon the forest department repairs the forest roads only at the end of the rains. The exposed stones were making the jeep jump and lurch forward as the powerful Mahindra diesel engine groaned in protest but steadily pulled us ahead as we climbed the slope. We had to use the 4 wheel drive at some patches due to sharp incline with slippery loose stones that made the rear wheel spin helplessly.

Monsoon is the time when the forests come alive, grow and flourish, a massive blanket of green covering all hills and plains save a few exposed barren rocks where nothing except lichen or moss grow. I have always enjoyed my forest drives during the monsoon though you need to take care to avoid forest roads when it rains heavily since the streams overflow making them impassable.

Soon we arrived at the forest rest house. As the jeep screeched to a halt a group of jungle babblers who were busily picking up insects from the litchi tree inside the campus flew up in noisy protest. The expansive verandah provided a soothing view of the forests that surrounded the rest house. In a jiffy the caretaker served us hot cups of hot tea deliciously flavoured by wild lemon leaves since there was no milk and no shop to buy milk powder either! The tea tasted smoky as it was brewed on a wood fire chullah since that was the only cooking fuel used in the entire plateau!

We were in a hurry as we had to enter the forest before dusk. We were on a mission, an exciting one too; to trace the rare Forest Spotted Owlet (Athene Blewitti) which everyone had thought had gone extinct since the last 100 years. The discovery of a specimen at Maharashtra had flagged our hopes about the existence of more such birds. 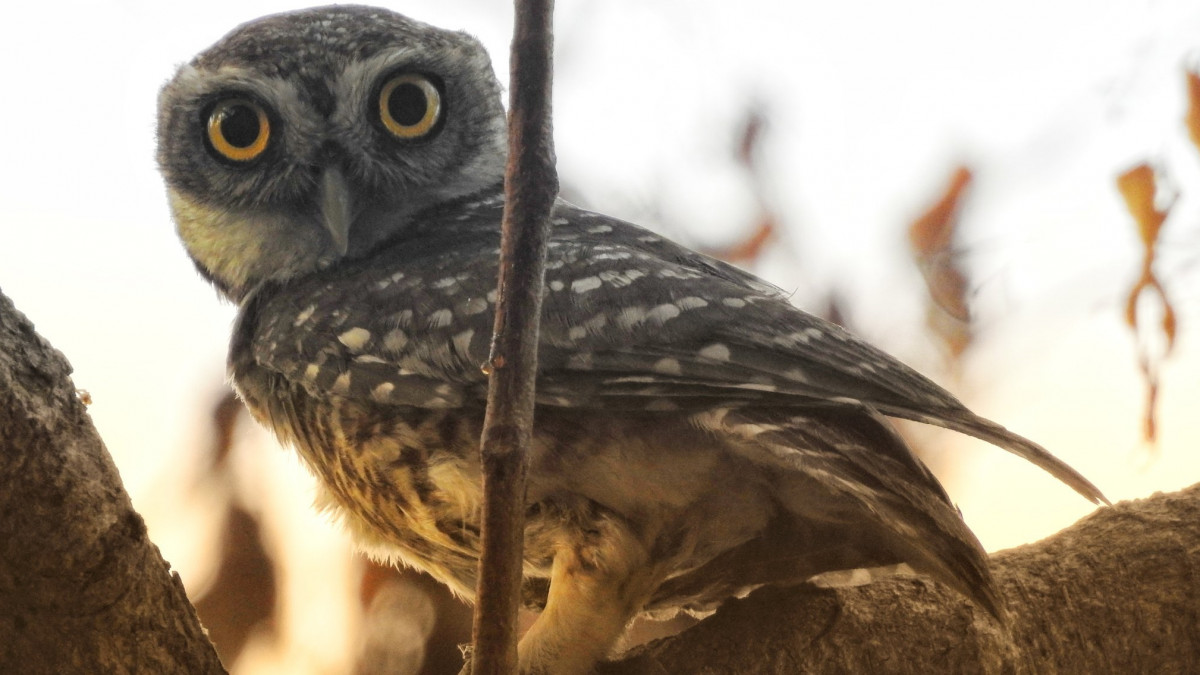 The Sunabeda plateau was a type habitat of this endangered bird. Sunabeda is also famous for its tigers many of which turned into man eaters and preyed upon the resident Bhunjia tribals. The threat of entire Bhunjia villages being wiped out by the man eaters grew! Unfortunately, both the tigers and the Bhunjias themselves are on the brink of extinction, since a few thousand tribesmen survive now apart from the sharp decline in tiger numbers in Odisha.

The Bhunjia had some quaint customs which no other tribe follows. A peculiar one was the construction of a separate hut for the kitchen. If any outsider touched it, even unknowingly, it was promptly destroyed by them by putting it on fire since it was believed to have become impure! Amazingly, for the Bhunjia "outsider" includes a married daughter too who does not stay with the family anymore! Must confess that this is the height of purity!

We had spotted the pugmarks of an adult tigress on the jungle trail we took to look for the owl. I had some worries walking in her territory since we had heard about their predilection for human flesh in the Sunabeda plateau! The forests in this area was unusual with stunted dwarf life trees, in sharp contrast to the luxuriant growth seen in other forests of Odisha. The poor growth was due to the hard bed rock and also due to regular frost bite that did not allow the trees to grow properly. I remember seeing similar forest growth in the interior parts of Simlipal too.

The light had started fading when we arrived at the bottom of the Patadhara hill slope. A forest stream flowed gently overshadowed by tall Sal & Arjuna trees festooned with myriad species of orchids. The jungle was getting ready for the night. The bird calls were becoming fainter and insects and other creatures of the night were waking up for foraging. The sun had almost disappeared behind the hill and a faint reddish orange glow lit up the western skyline. Nightfall comes without warning in the jungles as it becomes dark suddenly; unlike in the open area cities.

Though there was no report of man eater tigers in the area, our trepidation was unavoidable; the sight of the pugmarks was still fresh in our minds. We constantly checked the road behind us to ensure that no carnivore was following us! Being on foot makes you realize how vulnerable you are! We were not safely seated on a Safari vehicle in a Tiger Reserve watching tigers knowing perfectly well that they will not charge and even if they do we could take off in seconds! In the darkness a tiger can see perfectly well what a human eye will never! What if we were the first victims of this tigress? Since we were aware human voices would scare away the owls, we strategically started a conversation since tigers normally avoid attacking humans in a group.

The old trees which looked like potential owl homes got our undivided attention. Any bird which flew up in the dusk got a closer look. We were eagerly scanning the tree branches without binoculars hoping to spot the elusive bird. This would be breaking news which would have made it to the front pages of the newspapers! We marched on silently with high hopes.

After a long walk of about a km on the dirt track we were feeling let down. Suddenly a small bird flew up! Multiple pair of bincos swung into action. The day light was not completely out and we could still see without flashlights. To our utter disappointment, it was a forest nightjar getting ready to hunt at night.

Nightjars are nocturnal forest birds and are active after sunset only! They prey upon the insects often catching them in mid flight like the common drongo. However, they have excellent night vision and can hunt efficiently in total darkness unlike the drongo which cannot.

We continued our walk for another half a km and soon gave up since it was now dark. The mysterious bird remained unsighted. We had to return dejected to the rest house having found no sign of the bird!

More From The Author: Riddle Of The Olive Ridleys In Odisha