Niyamgiri is the abode of the Dongria Kondh tribe, an endemic and unique tribal group whose population is less than 10,000.

Small babus with deep pockets: The growing menace of corruption in Odisha

National Language War: Time For A Rethink On Language-Integrated India

The sound was unmistakable, though unfamiliar. Was it a dream! Who could be singing at this unearthly hour? Dawn was yet to break and the inky blackness of the night enveloped the hillside. With bleary eyes, I pressed the light button of my watch. It was 3.30AM, too early for us to get up.

The high pitched voices of the Dongria Kondh tribal girls singing in chorus wafted through the crisp night air. It was apparent that several groups of feisty maidens were doing a singing match with peals of laughter! The local Kondh guide explained to us the Kui words. “Why are these people running after snakes or frogs? Will these town people save us from the Company?” The Dongria Kondh maidens are fond of singing and the community spends a lot of time in singing and dancing!

Niyamgiri is the abode of the Dongria Kondh tribe, an endemic and unique tribal group whose population is less than 10,000. The Dongrias believe that the hill country belongs to Niyam Raja Penu, a male Kondh deity. The Dongrias have derived their name from 'Dongar' which means agricultural land on hill slopes in Kui dialect. They have a distinguished heritage, because of their dress, lifestyle, community practices, indigenous skills and cultural pattern which is deeply interlinked with nature and forests. The total population of the tribe is believed to be around 10,000. Their unique practices have always intrigued me as they are yet to be engulfed by modernity! 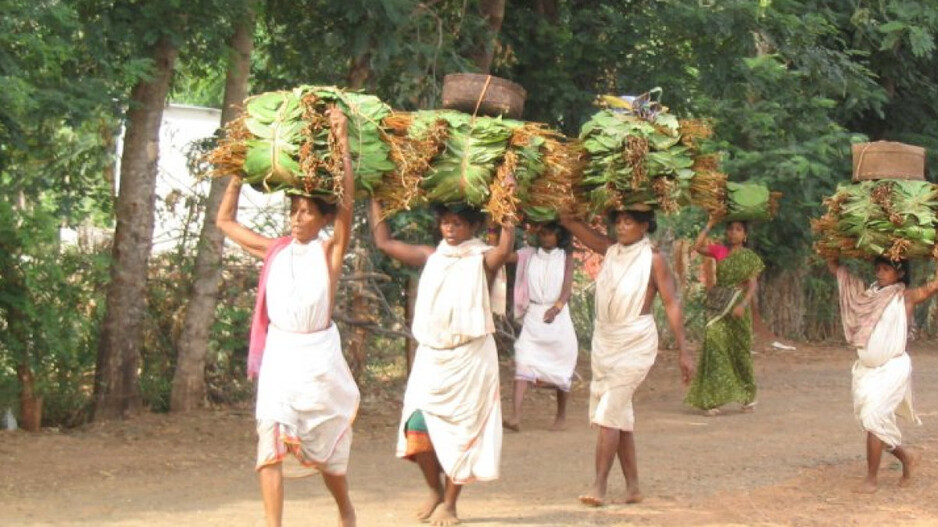 Upto the recent past, very few Dongria Kondhs even knew the Odia language which made communication difficult for plains people! Their elusiveness and shy nature has kept them insulated from modern lifestyle and they are still reluctant to mingle with outsiders. The Kui language does not have a script though it is a language rich with words related to forests, weather, animals and reveals their umbilical link with nature.

After the amazing pre-dawn unlikely experience we prepared ourselves for the trek to   Khambeshi and Jarapa villages which were more than 15 km away. With backpacks loaded with rations for two days, we left for with the local guide. Enroute, we crossed several Dongria Kondh hamlets with neatly laid out rows of houses surrounded by maize fields and fruit orchards. The fruit season will end soon; ripe mangoes littered the ground; the fruity pungent smell of rotting jackfruit hung in the air. The Dongria Kondhs are good farmers and cultivate mangoes, jackfruit, pineapple and bananas. Since these fruits are cultivated without fertilizer or pesticide, they are unbelievably tasty.

As we marched ahead, we came across innumerable hill streams gushing down the hill slopes carrying the muddy water of the pre-monsoon rains. This area was extremely rich in water and even in the dry season when the rest of Kalahandi district suffers from drought, hundreds of rivulets flow in the hills providing a rich source of water to the resident wildlife. This water feeds the paddy fields of the Kondh farmers at the hill base as well.

The cacophony of squabbling birds broke the stillness of the morning air. We could also scent the distinctively redolent smell of ripe fruit. Looking around, we found a fig tree (Udumbara) which provides excellent food for birds and herbivores.  The branches and trunk were overlaid with its bright scarlet fruits. Trees have evolved over millions of years to attract birds by brightly coloured fruits so that seed dispersal is easy. We counted ten species of birds including grey hornbills, mynahs, barbets, orioles, green pigeons, etc. We could find the hoof prints of sambhar and barking deer beneath the tree who had fed on the fallen ripe fruit, the previous night.

A little ahead, we sighted a lone crested serpent eagle flying around in lazy circles looking for prey. It has extremely sharp vision and can easily spot a 1 foot long snake on the forest floor! A couple of Indian hornbills suddenly rose from a tall tree, flying off to the hilltop as they noisily flapped their huge cream speckled wings. A beautiful racket tailed drongo streaked across our path, its magnificently iridescent black racket shaped tail trailing behind. They live as a pair and soon its mate followed.

After we turned a bend on the rocky forest trail, we saw the magnificent Niyamgiri hill looming before us. Its steep slopes were covered with thick lush green vegetation invigorated after the recent showers. The bald top of the hill looked like as if somebody had put a hat on it! We knew that the bare hill top contained deposits of precious bauxite ore eyed by miners. Thin streams of water cascaded down the hill slopes from innumerable springs. The bauxite reserve was a giant sponge which soaked up rainfall and supplied the stored water through perennial springs. Alas what would happen if this giant water tank is destroyed? 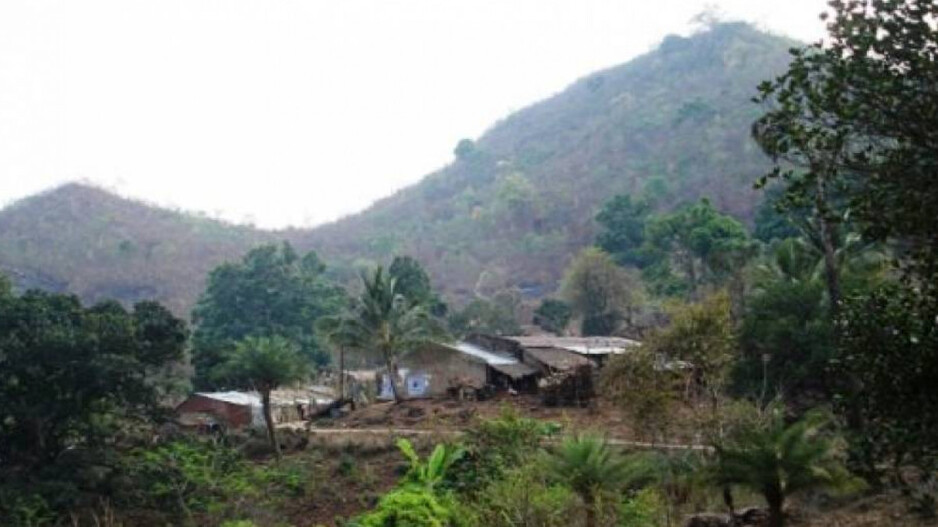 Soon we could see Khambeshi village nestling below the towering peak of Niyamgiri. Curls of smoke rose lazily from the tiny huts. A few village dogs came out to bark at us. This village was very primitive without any signs of modernity. We wondered if the residents still followed their horrifying blood rituals! The Kondhs used to offer human sacrifice known as “Meria” to mother earth for abundant harvests. Thankfully, this practice has been abandoned long ago after the horrified British stamped it out.

The pangs of hunger made us stop for our frugal lunch. Breakfast had been a quick affair with flattened rice (chuda), molasses (gur) and banana. The guide soon had a blazing fire going on which he first put the rice to boil while we started chopping the onions. Soon a meal of rice, dal and mashed potatoes was ready.

We had been trekking for more than five hours and developed a strong appetite! It was heavenly, eating the freshly prepared food beside a gurgling stream with birds for company while the omnipresent Niyamgiri hill towered over us! A line of black ants had arrived eager to carry away the tiny bits of rice, dal that had fallen on the ground! How did they find us so soon I wondered! Ants have an incredible sense of locating food and once a scout finds food he relays the message to his group and in no time a line builds up.

After a brief rest of half an hour we were off again in search of Jarapa our next destination. With no Google map to guide us, we lost our way. The village was nowhere in sight and night was approaching fast! In the hills, nightfall comes early.

Where shall we find shelter in? An abandoned machhan was discovered. This would be our shelter once we did some minor repairs. Just a little before sundown, while we were looking for fresh bahunia vines to tie the branches, we heard a slithering sound near a stream. Suddenly, a King Cobra reared up in front of our incredulous eyes. We were speechless as the magnificent serpent looked at us, almost motionless. However, it turned and disappeared in a whiff, its massive glistening black tail flashing by! King Cobras are timid snakes despite their enormous size and flee at the first sight of man.

Darkness descended abruptly on the deep forestedvalley. The crescendo of thousands of bush frogs resounded, as the males mouthed their mating calls. We caught a frog sitting on a slender branch. It was a Philautus but different from Philautussimilipalensis, the only species of Bush frog described from Similipal and Kapilashill. We were excited since it could be new to science!

With flashlights and camera in hand, we explored boulder crevices and leaf litter for lizards. Lo behold, we found a strange looking lizard sitting on a rock surface. On comparing it with our reference books, we are surprised to find out that it was the Geckoellajeyporensis which was believed to be extinct since a century after British zoologists had reported the species from its type locality at Pattangi hills. Pratyush Mahaptra and Prof S.K. Duttathe two herpetologists of our team embraced each other in joy as the significance of the discovery sunk in. I congratulated them wholeheartedly as this confirmed my belief that Niyamgiri hill range is a treasure trove of rare wildlife species.

When we flashed our lights at a large rock, a group of small lizards immediately scampered off to hide inside the nearby crevice. These lizards which were light golden in colour with speckled skin were never seen by us earlier. With fluttering hearts, we realized that they were golden geckos, reported from neighbouring Andhra Pradesh earlier but never from Odisha!

So rare is the species, that it has been listed under Schedule I of the Wildlife (Protection) Act, 1972. The roof of the crevice was full of eggs clinging to the surface. These sensitive lizards are only found at high hills. There is a substantial population of golden gecko on Niyamgiri hillside attributed to perennial hill streams, rock clefts, high humid climatic condition and lack of biotic interference. This lizard will be the first to perish if the rocks are blasted by mining, as they live inside dark caves and do not tolerate sunlight.

As the night lengthened, we could hear the squeals of a herd of wild boar as they busily ploughed the ground near the stream for wild tubers. Soon darkness covered the forest and the guide started unbundling the pots and cookware to prepare our dinner. The stars shone bright in the clear night sky as there was no pollution to obscure our view. I wondered how long will Niyamgiri Raja guard his holy hill from the miners and how far will our society whose wants never seem to end allow the Dongrias to live in peace and harmony.

(This is an opinion piece. The views expressed are the author’s own and have nothing to do with OTV’s charter or views. OTV does not assume any responsibility or liability for the same. The author is a conservationist and a former member of the National Board for Wildlife. He can be reached at kachhapa@gmail.com)

More From The Author: The Incredible Wildlife Of Odisha