Passing through the hilly terrains of Rayagada district, the lush, green patches of forest cover in Muniguda and Bisamcuttack block will definitely attract you. It is the result of the hard work of the tribal women of these areas who have now cherished their efforts that they initiated a couple of years ago.

Passing through the hilly terrains of Rayagada district, the lush, green patches of forest cover in Muniguda and Bisamcuttack block will definitely attract you. It is the result of the hard work of the tribal women of these areas who have now cherished their efforts that they initiated a couple of years ago.

Forests are a vital livelihood support system for tribal in Rayagada district. Most of the tribal depend either on forest or on agriculture. Forest resources provide them with food, medicine, fodder and grass, fuelwood and water for irrigation. Degradation of forest cover was virtually threatening the environment and the food security of the tribal as well. Realising this fact, the tribal women of Patangpadar village of Muniguda block of Rayagada district have taken initiatives to protect the forest in their area. Their honest effort can be seen in the form of the Ghodasala Dongar (small forest hill top) area is about 60 acre, is full granary with Mango, Mahua, Jackfruit, Guava, Blackberry, Tamarind and Saal trees. These forests provide food and living source to the tribal throughout the year.

Ratani Jakesika, 42, of Patangpadar village every day goes to the nearby Ghodasala Dongar and collects the greens, different fruits, tuber and roots for her children. With no source of livelihood support in the area, forest is the only hope for her family during the rainy season. “Forest is protecting my children from starving, so is it not my duty to protect the forest?” Ratani asked.

Tales Of The Tea Tribes

For Covid Victims – No Dignity After Death..

Gutuli Saraka, 53, is a mother of three children was migrating to other districts to earn her livelihood and to feed her children but since few years, she is not migrating rather she joined the group of women in the village who are protecting the forest and not only getting the food but the livelihood source from the forest.

Ratani and Gutuli are those among 30 women in the village who have been protecting and guarding the forest since last couple of years. These 30 women in the village split in six groups having five members in each group and they have prepared an unwritten shift to guard the forest on a rotation basis. They guard the forest with lathis and the axe on their hands.
The women themselves developed their modalities to regulate collection of firewood. They are also sometimes spending small amount collectively to meet the minimum expenses for forest regeneration and protection. As the women are no more required to walk long distances to collect firewood, they have now more time for other economic activities. 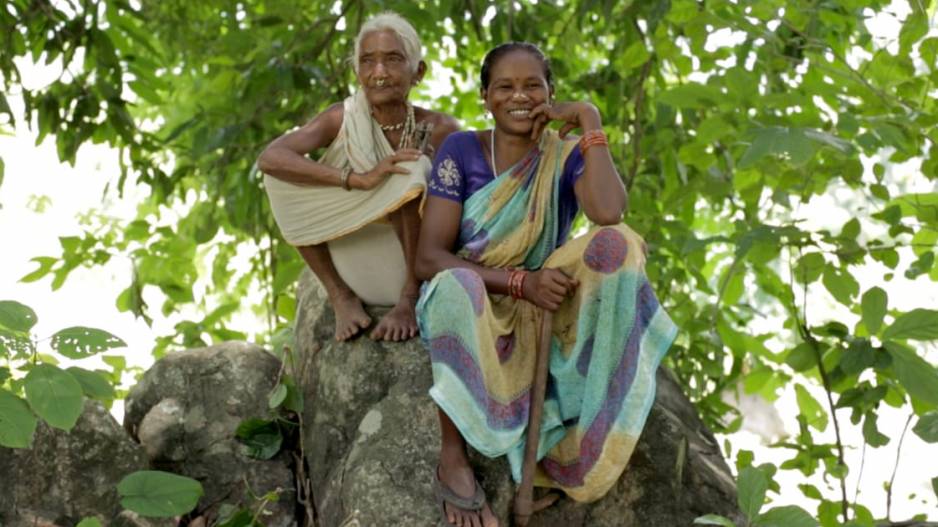 Along with the forest protection, they are collecting such non-timber products as Tendu Patta, Char and Sal seeds, Mahua, Harida, Kusum, Sisal, Bamboo, Mango, Jamun and selling in the market. The Forest products also become raw materials for making a number of items for the home, such as bidi, brooms, baskets, mats, rope, home-made toothbrushes and leaf plates. This is adding income in their families. Non Timber Forest Produce (NTFP) collected from the regenerated forests is also enriched the local economy.

“Initially when we started this forest protection movement, our male counterparts did not support us because the timber mafias were giving them some money for their liquor and taking their help to transport the wood log. So we had to convince our male counterpart not to help the timber mafia and support us. The member of the Living Farm too tried to make them aware. It took time but finally, our male members convinced and they supported us in preserving and regenerating the forest,” Nandini Sikoka, another member of the forest protection group explained.

“Now you can see we have successfully protected and regenerated three Dongers (three small hill tops) named as Ghodasala, Redagudi and Mundra dongar spread over 60 acres of area each around our village,” she happily told.

The men of the village admit the forest has survived because of the women. "We used to spend most of our time in drinking liquor and cutting forests. It was only after these women started the movement we realized the importance of forests for our survival," says Dambaro Majhi.

With the help of Living Farm, a local NGO implementing the Fight Hunger First Initiative (FHFI) project funded by Deutsche Welthungerhilfe (WHH) of Germany, to address the issue of malnutrition and hunger in Rayagada district. Living Farm has made them aware to protect the forest which is the source of their food security. Their dedicated effort to regenerate almost extinct forest in their locality has paid their community with rich dividends.

According to the Living farm, a few years ago the wood and timber mafia were very active in the area. They were cutting the trees illegally and destroying the forest. The local villagers marginally gained financially by giving their tacit support to them for transportation of the wood logs. However, with passage of time, the women of the local villages faced the heat of the dwindling forest cover. They were forced to walk miles to collect fire wood for their daily usage, as the local forest which was earlier their source failed to meet their needs.

“We were working on the food security of the tribal so we started creating awareness about the uncultivated food and their nutrition value. We were motivating them to add those uncultivated food in their daily diet so that their food security aspect will be taken care of. In this process the tribal realized that 90 percent of uncultivated food comes from forest so if the forest is protected then only they can counter hunger and starvation and they decided to protect the forest by their own," Bichitra Biswal, Project Coordinator, Living Farm explained.

This awareness to protect the forest has now spread among the tribal in other blocks of the district. Taking inspiration from the women of the Patangpadar village, the tribal women of another village name Patharagarh in Bisam Cuttack block has gone one step ahead in conserving and protecting their forest. There are so many instances when the villagers stand as a wall against the forest department and opposed the Commercial plantation of teak and Eucalyptus.

Patharagarh is a small tribal village of Hazaridang G.P, of Bisamcuttack block of Rayagada district consisting of 51 tribal households. Most of the household depends upon daily wages and forest products for their daily livelihood. A few area of agricultural land was insufficient to nurture villagers. So, natural forest had an important role towards community’s life and livelihood.

Once Forest department staff reached at village and mobilized villagers to clean the bushes in their forest for plantation work under MGNREGA. Women members of the village asked them to say the name of the trees which they want to plant. Forest department personnel shared that, they will plant teak and eucalyptus in their forest, from which village community will get more benefit. But women members of the village clearly said them no.

Tamba Tuika, a 67 years old women said, "We don’t want these useless trees in our forest. We are gathering numbers of greens, fruits and tubers from our forest and consume it each and every day. If you want to regenerate the forest please plant trees which we want, which will give us food, fodder and shelter. We will get nothing from these trees, so we don’t want these trees in our forest," Tamba expressed bravely.

Other men members of the village also denied planting those useless trees in their forest. They said to forest department personnel, "If these trees will be planted, we will root out it. Forest department personnel failed to convince community and went back. Now community members of Patharagarh have planted trees like mango, jackfruit, mahua, guava, black berry, barada saga etc in their forest on their own.

The participation of women in forest protection is not a new phenomenon. The country has a history of protecting and managing the forest by its traditional means and practices. Despite the background, the declination in the forest area has increased. Tribal Women constitute the most important user group in collecting forest produce for meeting the family’s needs. But the drudgery of tribal women has increased due to the declination of forest. 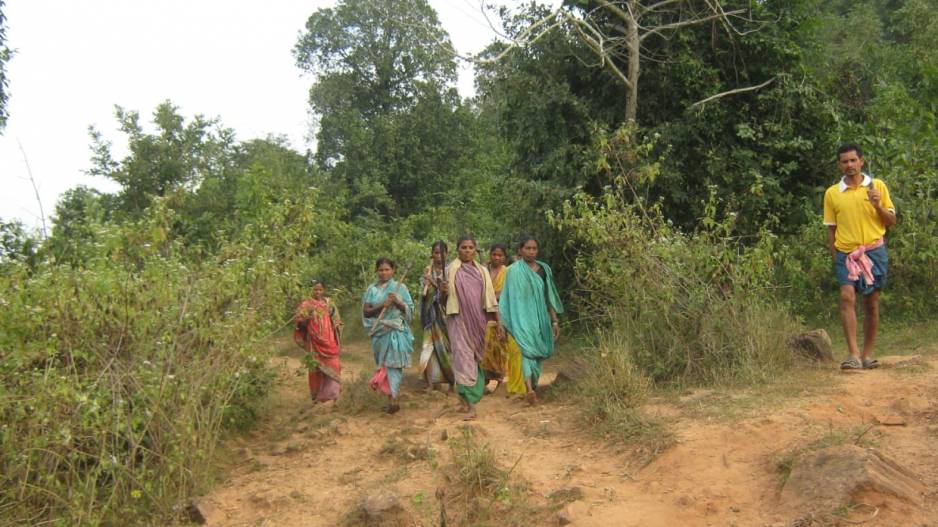 “We realized that the Tribal women have the strength and power. They are blessed with the indigenous traditional knowledge of the forest management and practices. We just had to mobilize and channelize their strength and power in a right direction. Now about 2000 women in 100 villages in Bisam Cuttack and Muniguda block are associated with this forest protection movement. If we can calculate roughly and count one Donger per village then also 100 Donger (small hill top) are being protected by tribal women in the district, and this is not a joke,” said Biswal.

Timber mafias with political connections are still big hurdles on the way of tribal protecting forest but women like Ratani, Gutuli, Nandini and Tamba realise the significance of their work and are prepared to keep it going in spite of any hurdles that may come their way. They assert with confidence, “We have decided to protect our forests at any cost because we know that they are our lifeline.”