Danasari is on a mission not to let anybody sleep with empty stomach during this Pandemic. She is trekking kilometers across hills and mountains and reaching out to people of inaccessible villages and delivering food and essentials to the people who are in distress.

Amidst the scorching sun, 48-year-old Danasari Anasuya, carries a load of bags on her head and some others in her hands as she walks through a hilly terrain during the Covid -19 lockdown period. At first, she might look like a migrant worker but the spectacle is more than meets the eye because she is a Hardcore Maoist  turned public representative, the  MLA of Mulug constituency of  Telangana.

Danasari is on a mission not to let anybody sleep with empty stomach during this Pandemic. She is trekking kilometers across hills and mountains and reaching out to people of inaccessible villages and delivering food and essentials to the people who are in distress.

“Years ago, when I was with the red rebels, several times these innocent villagers have fed me when I was hungry, now it is my turn to feed them,” says Danasari.

“When I was crossing the hills and terrains on foot, it took back me to my old days when I wielded guns in my hand but now the same hands sport rice and vegetables, and essentials for distribution to the needy in the villages,” Danasari who is popularly known as Seethakka (Elder sister) in her area adds.

Telangana is also badly affected by the Coronavirus as its neighboring states like Odisha and Chhattisgarh, where around 3000 plus cases are reported on a daily basis. There are many areas of Telangana, which are situated in the middle of the forests, where one has to walk several kilometers to reach.

Amid such a situation, people living in these areas could not get help during the lockdown. Now Dansari (Seethakka) has taken up the task of helping such people. She and her team are supplying ration and other essential items to almost 275 hamlets under Eturunagaram, Tadwai, Mulugu and Govindaraopet mandals of Mulugu constituency. All these hamlets are located within 20-25 km radius in the dense forest pocket.

On her journey to reaching out to the people, Danasari narrates how she has crossed streams, climbed steep mountains and never hesitated to trek through dense forests to reach these villages, many of which are located in Maoist-hit border regions with Chhattisgarh.
“These areas are familiar with me. I have trekked so many times in these terrains during my Maoist days so it is not very hard for me to do so,” she says smiling.

Belonging to the Koya tribe, Seethakka’s family used to stay in a remote forest dominated inaccessible village of Telangana. Poverty, deprivation and exploitation of the upper strata pushed her to join the left wing extremism at an early age of 16.

Her journey from an ordinary cadre to the Maoist commander was very tough. She was heading an armed squad active in the same tribal belt. While operating in the forest as a gun-wielding Maoist rebel in the late 1980s to the early 1990s; she was a terror for the people and had given sleepless nights to the forces. She had witnessed many police encounters and also participated in many gunfights with the police but after losing her brother and husband, who were also in red fold, in an encounter, she disillusioned with the movement and surrendered to the police in 2004 under a general amnesty plan.

The new innings poured new commitments for her as she pursued her studies and secured a law degree. Life took a new turn for Seethakka when she decided to come to the public life. She joined Telugu Desam Party (TDP) and contested from Mulug in 2004 elections. However, facing a Congress wave, she could only finish as a runner-up. In 2009, she won the election from the same constituency. She finished third in 2014 polls and in 2017 she quit TDP to join Congress. She made a strong comeback in 2018 by wresting the seat despite the statewide sweep by Telangana Rashtra Samithi (TRS). 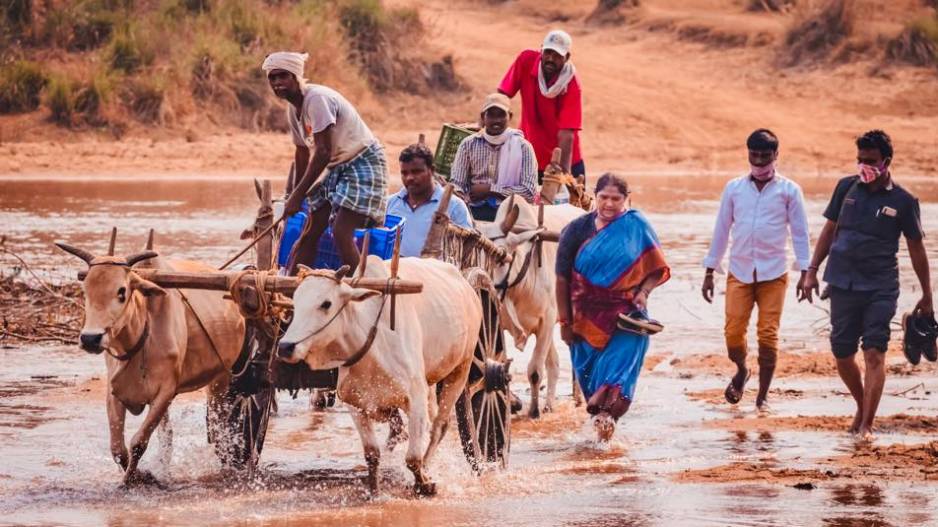 Last year, during Covid period, Seethakka had distributed more than 8,000 kg rice among people in her constituency. She received accolades from all quarters because within 45 days, she had covered 425 out of 640 villages in Mulug constituency.
With help from a team of her co-workers, she gets up at 4:30 am, finishes packing rations and essentials items by 5:15 am and then starts to reach to the needy people to the inaccessible villages. The Adivasis in the interiors are often unaware of what is happening outside and the lockdown perhaps came as a shocker for them.

“The Adivasi only knew that there is some disease and should not step out. People who have some rice are surviving with rice jawa (gruel). Though Telangana government announced 12kg rice and Rs 500 for white card holders, tribals have been left out from these benefits as they don’t have any official document. She says this is why she took it upon herself to help them in the time of pandemic,” she said.

“They have chosen me as their representative. If they are in trouble and hungry how can I be happy. Is it not my moral responsibility to serve them as much as I can?” she questioned.

Seethakka is very active in social media. She also runs a campaign #GoHungerGo in different social media platforms which was quite popular during last year and received lot of appreciation.

Undoubtedly, once a Maoist commander, Seethakka has now emerged as a savior for adivasis in Mulugu in these difficult times and her story may inspire many in days to come.