The Kapil Sharma Show's Bhuri Talks About Feeling Horrible, Walking Away Without Regret

The Kapil Sharma Show’s Bhuri aka Sumona Chakravarti triggered speculations with her latest post that talks about feeling horrible and walking away without any regret.

COVID-19 Odisha Covid-19 Updates: Graph Falling, Will There Be Relaxations

Kapil Sharma recently announced the return of his famous comedy programme- The Kapil Sharma Show in style by sharing a few pictures with his teammates. While the clicks showed old faces like Krushna Abhishek, Bharti Singh, Kiku Sharda, Archana Puran Singh, Chandan Prabhaker, and also Comedy Circus fame Sudesh Lehri, what surprised many was the absence of Sumona Chakravarti aka Bhuri in the picture which triggered speculations that she might not be joining the new season of The Kapil Sharma Show.

And the speculations have now become almost real news after Sumona shared a cryptic note on her microblogging page yesterday. In the post, the Bade Achhe Lagte Hain actress said that no one knows if something is meant for you unless and until you give a chance, be it a new job, a new relationship, a new experience, or a new city. 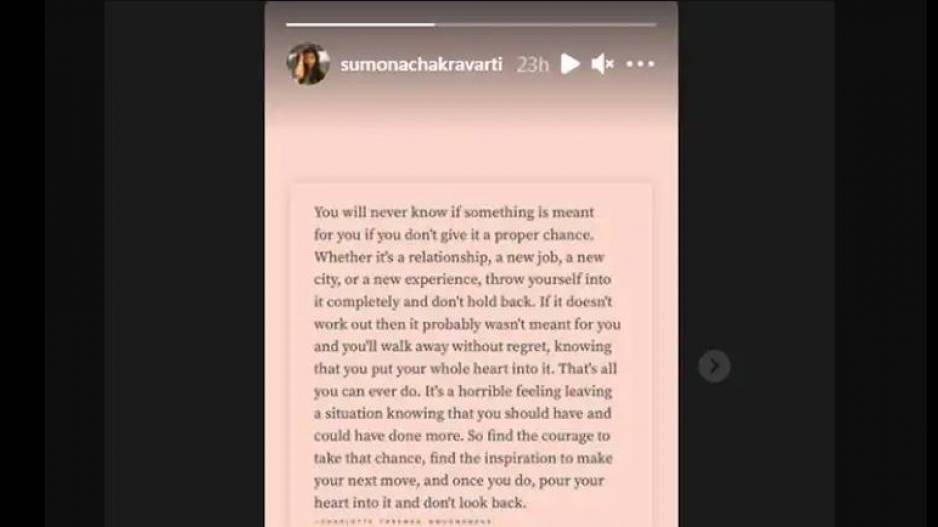 According to Sumona, if things do not work out after giving your 100%, it means that it was not for you and you must walk away without any regret. The popular actress said that it is a horrible feeling to walk away knowing that you could have done more but one must find courage, take inspiration and make the next move.

The Kapil Sharma Show: Is Bhuri Not Coming Back? Kapil Says New Beginning With Old Faces

Indian Idol 12 Finale Breaking: These Past Winners May Join The Show

Sumona further added that once you have decided to move on, do not look back and pour your heart into whatever you have chosen next. The much-adored Bhuri from The Kapil Sharma Show even quoted an interesting quote from the book of Charlotte Freeman-Everything You’ll Need.

Now, this post is sort of a hint that Sumona is trying to move on from something important in her life. Her post has further fuelled the speculations that indeed the actress has either opted out or been dropped from The Kapil Sharma Show.

Now, it would be interesting to see what Sumona does next if she is not a part of the upcoming season of this famous comedy sitcom on Sony.