After being in a relationship for several years, the star couple tied the knot in Goa in 2017. Sam and Chay married as per traditional Hindu customs and then the next day they took sacred oaths/vows as per Christian customs. The grand destination wedding of Sam and Chay was worth watching for their fans.

Bollywood actress Kangana Ranaut has been hitting the headlines with the release of Thalaivii. Kangana is one among the BTown actresses who mostly remain surrounded by controversies. The 'Manikarnika: The Queen Of Jhansi' actress is quite vocal about her thoughts and has till date locked horns with many biggies of Bollywood including several political figures.

Now, the actress has shared her thoughts on shocking and disheartening news for south Indian movie lovers.

The recent news that shocked several Telugu movie lovers was Samantha Ruth Prabhu and Naga Chaitanya's separation. After weeks of suspense and speculations, a fairytale love story had come to an end.

Samantha and Chay both confirmed about their separation on Saturday on their social media handles. One of the most loved couples in Tollywood, Samantha and Chay paired for the first time in 2010's 'Ye Maya Chesaave' which went on to become a cult movie. The power couple has worked together in four movies- Ye Maaya Chesave, Manam, Majili, and Autonagar Surya of which three, except for Autonagar Surya, were major superhits. Their onscreen chemistry drove their fans crazy.

After being in a relationship for several years, the star couple tied the knot in Goa in 2017. Sam and Chay married as per traditional Hindu customs and then the next day they took sacred oaths/vows as per Christian customs. The grand destination wedding of Sam and Chay was worth watching for their fans.

Even, their dreams of becoming pan-India stars also worked out. While Sam rose to fame and received high appreciation for her Raji character in 'The Family Man: Seasons 2', Chay is waiting for the release of Laal Singh Chadha alongside Aamir Khan which will mark his Bollywood debut. Currently, he is basking in the success of 'Love Story' that released a few days back.

However, everything ended on October 2 as the star announced their separation.

Meanwhile, the Queen actress Kangana has blamed a Bollywood actor for the star couple's separation. Taking a dig at the unnamed actor, Kangana wrote: “This south actor, who suddenly divorced his wife was married for 4 years and in a relationship with her for more than a decade, recently came in contact with a Bollywood superstar who is also known as Bollywood divorce expert. Has ruined many women and children lives is now his guiding light and agony aunt. So, it all went smoothly. This is not a blind item. We all know who I am talking about.” 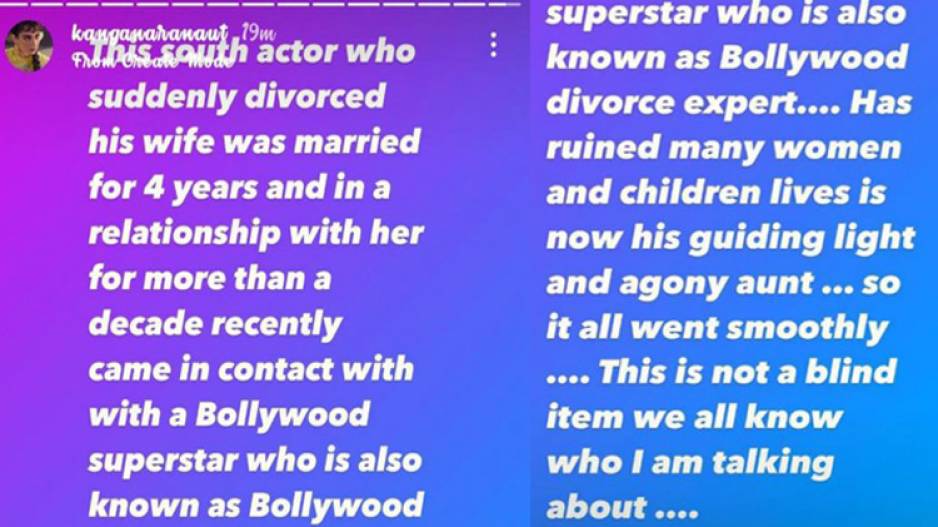 Earlier in another post, Kangana had shared her thoughts about the divorce culture in India and blamed men as the main reason. However, such an indirect indication of the actress might not have gone well with many.

While the recently separated star couple has requested all to give them privacy, such a statement from Kangana might ignite a debate.