Mirzapur 3 release: Check updates by actors and makers so far

If you are a fan of the series and want to know the latest updates related to the show, don't worry as we have got you covered and have below listed all the details we know so far

Amazon Prime Video's most successful web series franchise 'Mirzapur' is gearing up for its third season. The craze of the show among fans is unbelievable as they eagerly wait for the series to premiere while they keep an eye on every minute detail related to the series.

So, if you are a fan of the series and want to know the latest updates related to the show, don't worry as we have got you covered and have below listed all the details we know so far.

Ali Fazal, who will be reprising his role as Guddu Bhaiya, has reportedly started shooting for the upcoming season. Reportedly, the actor had earlier revealed that he is very excited to shoot for 'Mirzapur 3' and is looking forward to working alongside all the brilliant actors on the show

Kapil Sharma and team have a blast in bus, watch what hilarious Krushna Abhishek does

"...since the last one year, we haven't had much of an opportunity to spend time with each other and it's a happy problem to have. Because everyones been doing some impeccable work and it's great to see all of us being busy. That's what makes this re-union more fun, of course all this keeping in mind the new twisty screenplay I am excited to shoot for 'Mirzapur'," Ali was earlier quoted as saying.

Beena Bhabhi gives a sneak peek from the set

Beena Bhabhi aka Rashika Duggal, who will play an important role, gave a sneak of her preparation for the season.
Dugal took to Instagram and shared a reel with the caption 'Pripare कर रहे है, showing several trunks with the name tags of the show's primary characters.

Actor Pankaj Tripathi, who plays the ruthless don Akhandanand 'Kaleen' Tripathi, said he quenches his hunger for power through the show. The actor in an interview to news agency PTI said that he is truly excited to be Kaleen bhaiya again.

"This is a lot of fun to do, the show and the role of Kaleen bhaiya. I am actually a powerless man in real life, so I experience power only through Kaleen bhaiya. The hunger for power, which is there in everyone, gets satiated through 'Mirzapur,'" the actor told PTI.

Bharat/Shatrughan Tyagi - who will return?

Actor Vijay Varma has started shooting for the show and had shared an Insta Story featuring the show's theme song in the background on the first day of the show.

However, the post had left fans curious as, in the video shared, he was seen getting out of his car as the camera focuses on the label pasted on his vanity van which read, 'Bharat/Shatrughan Tyagi'. 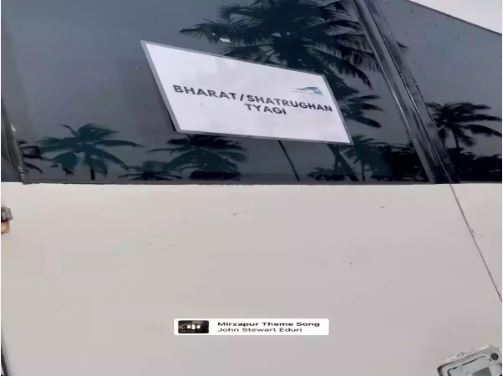 He leaves the fans wondering if Varma is back as Bharat Tyagi or Shatrughan Tyagi.