While congratulating the makers and the team, she also requested the Raj and DK to release their first collaboration, The Family Man 2 soon.

The makers finally confirmed that the most-awaited web series, The Family Man 2 will be released this summer. Since the announcement, not only the viewers but also the star cast is not able to keep calm. Samantha Akkineni, who is set to venture into the world of OTT with the series, also took to her Instagram to urge the makers to quickly release the show.

Recently, the South superstar watched Cinema Bandi which is produced by the makers of The Family Man 2, Raj and DK. The film has been garnering a lot of praise from the critics and audience alike and Sammy as well was impressed by the film. She took to Instagram to share her review of the Praveen Kandregula directorial film. While congratulating the makers and the team, she also requested the Raj and DK to release their first collaboration, The Family Man 2 soon.

Along with the endearing movie poster of Cinema Bandi, she wrote, “ #cinemabandi is endearing and so full of hope. Three cheers to the team for bringing us this gem of a film....a breath of fresh air. Congratulations @rajanddk so so happy for you. Now, let's release #thefamilyman2 (sic).” 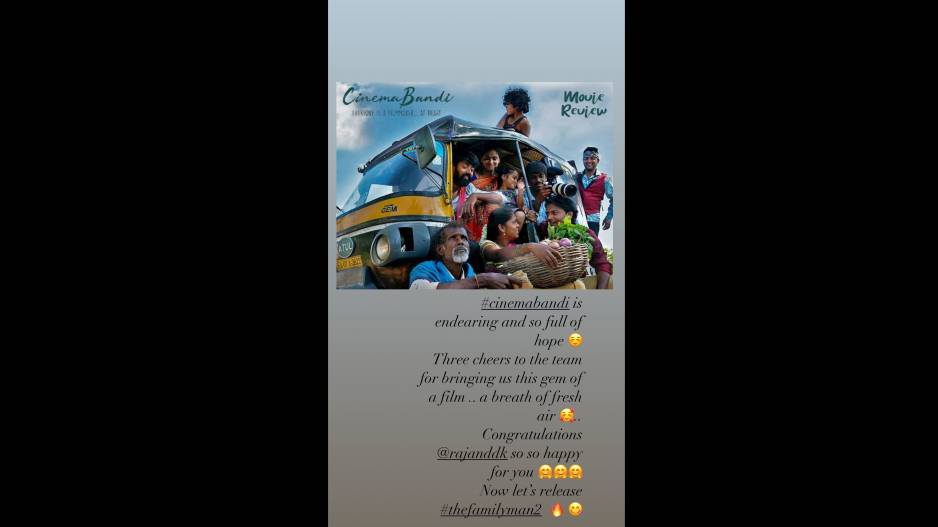 'Samantha Has A Bold Role In The Family Man: Season 2'

Samantha Akkineni is clearly excited about the web series and wants it to be released as soon as possible. Earlier, other cast members had revealed that Sam's performance is mind-blowing in the show and will shock the audience. She will be playing the antagonist, Raji who will be clashing with Manoj Bajpayee aka Srikant head-on in the show.

The Family Man 2 was originally scheduled to be released on February 12 earlier this year but was postponed after the controversy surrounding the web series Tandav’. Following the same, there have been a lot of speculations on the series’ release date.

As per the latest reports, it seems the makers and OTT platform has finally zeroed on a date for The Family Man 2, which is said to be June 11.