Amid the gloomy COVID pandemic, which has been continuing for over a year now, doctors have been playing a crucial role as frontline warriors to battle out the lethal virus and pull out patients from the shallows of death.

Oh No! Salman Khan Bitten By Snake At Panvel Farmhouse On Birthday Eve

Watch: Ranveer, Deepika Walk Hand In Hand As They Return From Vacation

Media Requests, But Malaika Arora Blatantly Refuses? Watch To Find Out What

Either it is Salman Khan's current debacle Radhe: Your Most Wanted Bhai or it's the viral video of a group of doctors performing on the movie's hit number, Seeti Mar, both are the talk of the town.

And unlike the movie that has received negative reviews from all quarters, the viral dance video of the doctors has impressed one and all.

Amid the gloomy COVID pandemic, which has been continuing for over a year now, doctors have been playing a crucial role as frontline warriors to battle out the lethal virus and pull out the patients from the shallows of death.

The Secret Of Allu Arjun: How Did The Pushpa Star Turn Into ‘The Stylish Star’

Recently, a video of a group of doctors dancing on Seeti Maar beats was uploaded on Instagram by Disha Patani's fan club. Actress Disha, who is playing the lead role in the movie was all praises for the video and shared it on her Instagram story.

Soon the video went viral and it garnered lots of appreciation from all corners, despite the debacle of the movie. People showered immense love for the video and praised the COVID warriors for their unique gestures.

In the video, the group of doctors are seen dancing on the music beats of the song putting on masks. As it seems, the group is performing in a hospital corridor. The COVID warriors danced to a Mandolin instrumental cover of the song. 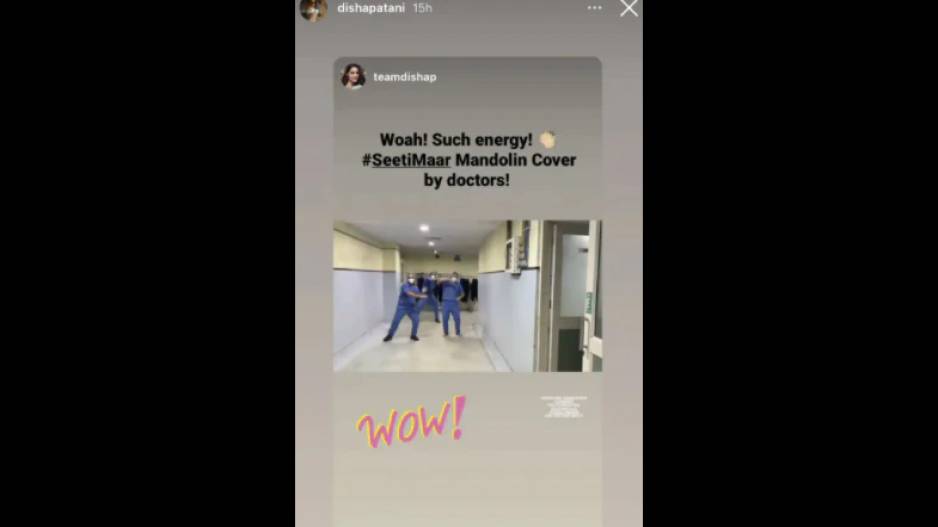 Kamaal Khan and Iulia Vantur have lent their voices for the song composed by Rockstar DSP (Devi Sri Prasad).

The movie helmed by Prabhu Deva was released in over 40 countries on May 13, including a theatrical release in major overseas markets. While in India, Radhe was released on ZEE5 with ZEE's pay-per-view service ZEEPlex on the OTT platform. It also is available with all the leading DTH operators.

After the debacle of Jai Ho, Dabangg 3, and Race 3, Radhe: Your Most Wanted Bhai is being counted in the list of flop films from Bollywood superstar Salman Khan who once was fondly called as the box office ruler. With back-to-back flops, it seems, the career of the ‘once upon a time’ box office ruler is going down the hills. However, this video of the doctors dancing is being liked by all despite the frustration for Salman starrer Radhe.