Earlier on Wednesday, Alia shared a frame with Priyanka Chopra and Katrina Kaif announcing her upcoming project 'Jee Le Zaraa' in which the trio will be seen sharing screen space.

Did you know: Akshay Kumar-starrer 'Prithviraj' had 5,000 costumes, 500 turbans used during shoot

Gabbar aka Shikhar Dhawan to make his acting debut in a prominent role, know details

The young social butterfly remains quite active on social media and keeps all updating about her life and happenings.

Alia on Sunday glammed up the digital platform by sharing two pics. The Raji girl took to Instagram and shared the pics in a sultry look in which she is seen adorning a bluish-green sequin kurta with brown shorts. As always, Alia looked stunning in the look.

Alia, Rashmika, Priyanka, Samantha And Their Craziness For This! #SeePics

She captioned the pic, " you change the world by being yourself ••••• YOKO ONO".

She copied the caption from the famous Japanese artist Yoko Ono.

Her pictures garnered near about a million hearts from fans and her comment box got flooded with appreciation.

Among the admirers, Tollywood actress Samantha Akkineni could be easily distinguished. The Majili actress sent her a red heart emoji. 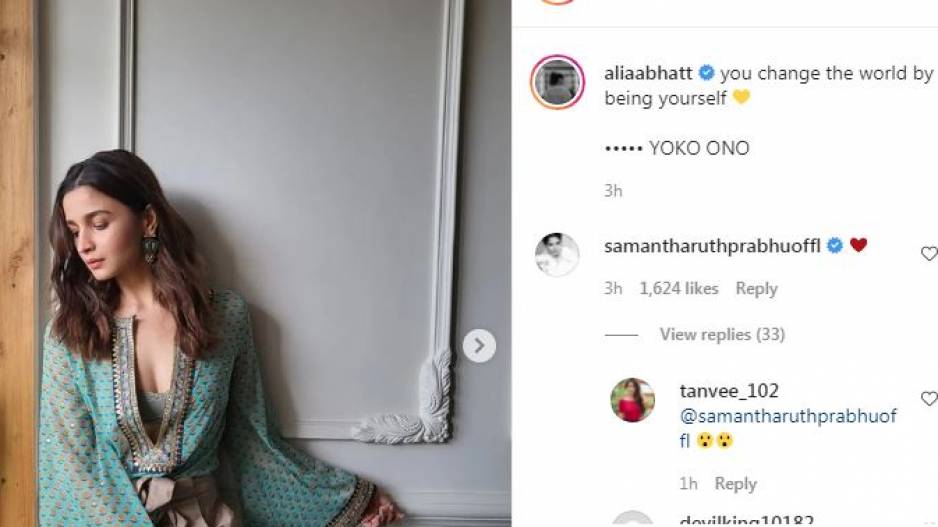 Earlier on Wednesday, Alia shared a frame with Priyanka Chopra and Katrina Kaif announcing her upcoming project 'Jee Le Zaraa' in which the trio will be seen sharing screen space.

"2 years ago, 3 girls came together with 1 dream. There was only one place to go to make that dream come true; to 4 of the funniest dream-makers and storytellers in the business @faroutakhtar @zoieakhtar @reemakagti1 @ritesh_sid And now 50 Zoom calls later. Countless laughs later. With hearts full of love and excitement. Here we are. #JeeLeZaraa," she captioned her post.

Both the flicks were based on friendship and road trips. Likely, as hinted by Alia, Jee Le Zara will focus on these three friends and their adventurous road trip.

On the work front, Alia is prepping up her South Debut with the much-hyped movie RRR scheduled to release on October 13. Apart from that, fans are eagerly waiting for Ayan Mukerji-directed Brahmastra, which is her another much-anticipated flick. For the first time, Alia will be seen opposite Ranbir Kapoor on the silver screen. The movie also stars Megastar Amitabh Bachchan. Besides, she is also working on Gangubai Kathiawadi helmed by Sanjay Leela Bhansali.