Prabhas and Saif will be sharing screen space for the first time in Adipurush. The film, produced by Bhushan Kumar's T-Series is being helmed by Om Raut. Apart from Saif and Prabhas, Kriti Sanon will be seen as Sita while Sunny Singh has been roped for the character of Laxman.

Adipurush is one among the much-hyped movies which movie lovers are eagerly waiting for. The movie is a cinematic adaptation of Indian epic Ramayana in which Baahubali star Prabhas will be seen as Lord Ram and Saif will be portraying the character of Demon King Lankesh Ravan. The movie has been described as the celebration of "victory of good over evil".

Anticipation among fans was quite visible on August 16 following a post of Darling Prabhas on Instagram. August 16 marks the birthday of Nawab Saif Ali Khan and Prabhas wished his Adipurush co-star and revealed his excitement.

Prabhas' captioned his post containing the Pataudi Nawab's picture: "Wishing you a very happy birthday #SaifAliKhan ji ! Can’t wait for everyone to see you in #Adipurush!"

Meanwhile, Saif's daughter Sara Ali Khan also wished the actor who turned 51 on Monday. Sharing a couple of pictures, she captioned the post: "Happiest Birthday Abba. Thank you for being my superhero🦸♂️ my smartest friend 🤓 the best conversationalist 📚 the coolest travel buddy 🍝 and one of the biggest support systems. Love you."

In one pic, Sara is seen with her doting dad, new mom Kareena Kapoor Khan and her cute newborn little brother Jehangir Ali Khan (Jeh) with a decorated cake in the foreground. While in the second pic, she is seen with her Abba with birthday balloons. 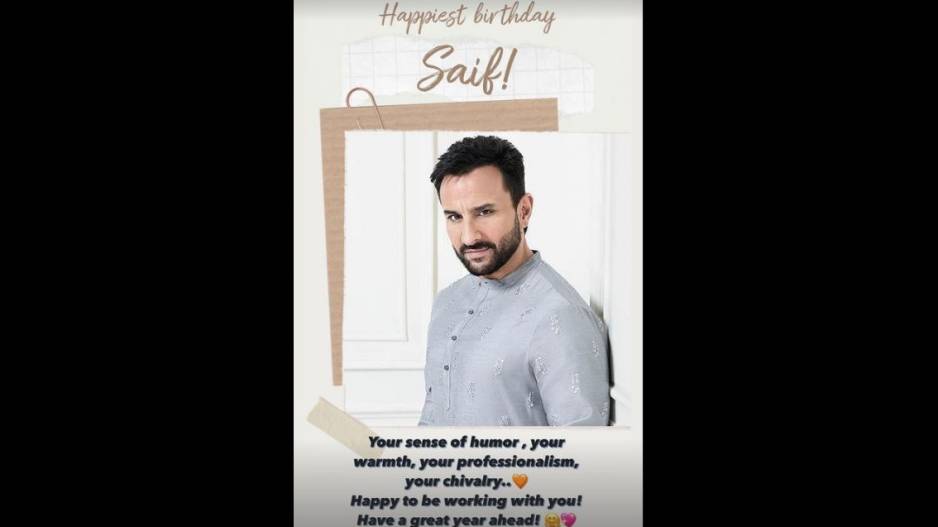 On the other hand, fans of the Rebel star are quite excited for the same. His stellar performance in Baahubali series has raised hopes and expectations of movie lovers pan India. After the resounding success of the magnum opuses, action-packed movie 'Saaho' was a debacle. However, fans haven't yet lost hope and are looking forward for Radhe Shyam and Saalar.

Prabhas and Saif will be sharing screen space for the first time in Adipurush. The film, produced by Bhushan Kumar's T-Series is being helmed by Om Raut. Apart from Saif and Prabhas, Kriti Sanon will be seen as Sita while Sunny Singh has been roped for the character of Laxman.

Adipurush is a follow up to Raut's blockbuster movie 'Tanhaji: The Unsung Warrior', starring Ajay Devgn and Saif.

As reported earlier, the director is using an international level VFX technology to ensure that the entire saga and fight sequences between Ram, Laxman, and Ravana come alive on the screen. Adipurush kickstarted the shooting in January.

While Prabhas is currently busy shooting for KGF helmer Prashanth Neel's Salaar he will soon join the shooting of Adipurush.