Indian Government has committed at 214 crore in the pipeline between August and December. Odisha needs 4.6 crore doses between June and December to fully vaccinate 18+years. As of now, the State has vaccinated over 82 lakh with one dose

The historic announcement made by PM Narendra Modi in his address to the nation today that the central government will provide free vaccines doses for all citizens in the age group of 18-plus years after June 21, is being seen as a booster dose to the Odisha finances, which is under stress due to intense second wave, lockdown and natural disasters.

As per the SBI research study, the central procurement of vaccines will make Odisha save at least a whopping Rs 14,650 crore, which is a massive 56.8 per cent more than the budgeted amount for the whole health sector in the State for the year 2021-22.

A Shot In Odisha's Arm

Simply put, the Google index has documented a sharp drop in mobility in the state to retail and recreation spots, grocery stores, parks and transit stations; besides residential and workplace visits. And it in a nutshell indicates a big drop in economic activities in Odisha.

Therefore, according to SBI research, the weekend shutdown announced by Odisha in April to control the second wave surge will cost the State's exchequer a loss of Rs 1,927 crore. Further, another estimate shows that the month-long complete lockdown by the State from May 5 to June 17 will be going to burden the exchequer approximately another Rs 4,800 crore. In sum, the lockdown economic burden on State is predicted to be as high as over 6,700 crores.

In the grim backdrop, taking into account the prevailing market prices of vaccines in the world market, the SBI study has estimated that the average loss amount to Odisha for meeting the cost of vaccine procurement from global vendors will be a massive Rs 14,650 crore. (see the image given below). 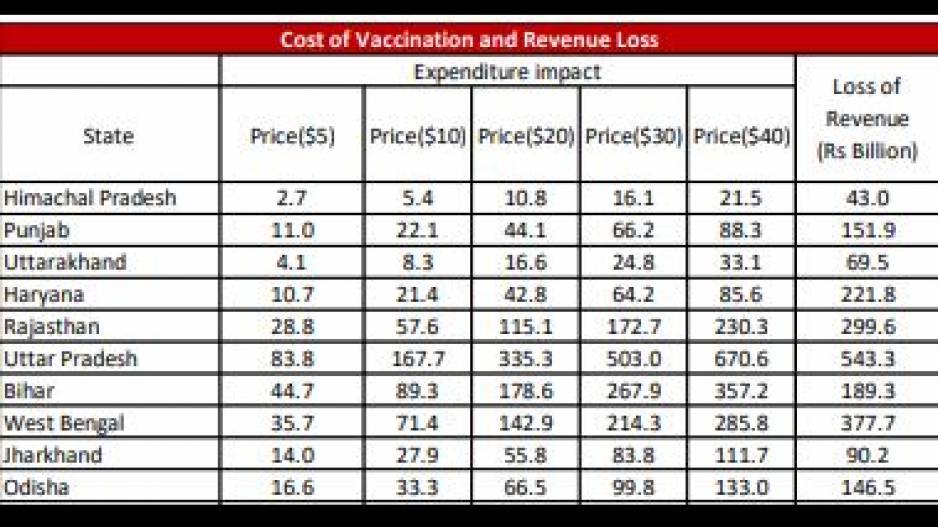 Therefore, the decision announced by PM Modi is being seen as a booster dose to the State's finances that are under severe stress after the acute second surge.

Post the lukewarm response to State's global tender, despite attractive offers like paying 30 per cent of the purchase order in advance to the manufacturers, a sop not offered by any other states like UP and BMC (Maharashtra), Odisha CM Naveen Patnaik has recently batted for the centralised procurement of vaccines. In a letter to CM of other states, Naveen urged all states to arrive at a consensus to allow the Centre to procure vaccines for the states.

'Rare' genome proves Covid was made in Chinese lab: US experts

In his address to the nation, PM Modi took a jab at the jab politics the country witnessed during the month of April, where many states, including Odisha, had blamed the Centre for inadequate vaccine supply. Many states, including Odisha had then also objected to the highly centralised vaccine procurement that had led to the drying out of vaccine stocks leading to the shut down of vaccination centres.
Odisha has even accused the Centre of discriminating against the State in allocating vaccines.

"Accepting the suggestions from states, the Centre has decided in May to hand over the 25 per cent work of the vaccination process to states, whereby states can directly procure vaccines from the manufacturers." the PM observed.

While announcing the landmark decision to provide vaccines to states free of cost, the Prime Minister has very categorically stated that the supply will be orderly streamlined to the states depending on the availability of vaccines in the market.

"As per UNICEF data, globally, the reported production capacity (per dose) stands at 22.2 billion in 2021. Out of the reported production capacity of 22.2 billion, 13.74 billion doses’ agreements is already formalized and out of this, 9.34 billion doses are secured and India has secured 0.28 billion (28 crores) as per the dashboard data in UNICEF," states the SBI report.

India is also exploring other options and the Government has committed at 214 crore in the pipeline between August and December, the report added.

As of now, the State has vaccinated nearly 82 lakh, including 15 lakh second dose and one dose to over 67 lakh. But the fully vaccinated in the State is estimated at a mere 4.8 per cent to date.

From June 21, the State needs as many as 4.6 crore doses to immunise the remaining over 2.3 crore population in the age group of 18+ years.

Bottom line: The vaccines in the pipeline and the requirement in Odisha hints at full vaccination of people in the age bracket of 18 years+ by the end of the year 2021.