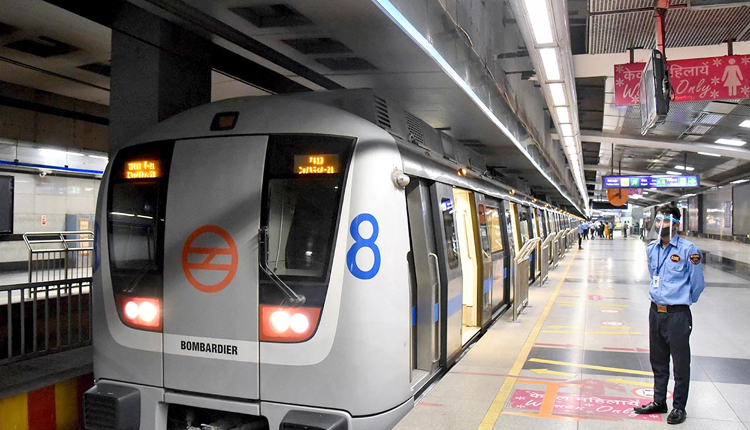 New Delhi: Metro services across the country including Delhi Metro, the lifeline of the national capital region, on Monday finally rolled on the tracks after coming to a screeching halt of over five months ago due to coronavirus pandemic.

For two days the yellow line, covering 49 kilometres with 37 stations consisting of 20 underground and 17 elevated stations, will remain operational for a period of four hours each in the morning, from 7 a.m. to 11 a.m., and evening, from 4 p.m. to 8 p.m.

According to Anuj Dayal, DMRC’s Executive Director of Corporate Communication, over a period of next five days, rest of the lines will also be made operational with all safety measures in place to check the spread of Covid-19 in the metro premises which requires everyone to follow a new normal of social distancing, face mask and hand sanitisation.

At a time when the capital city is reportedly witnessing a second wave of the viral infection, the government has allowed for the metro rail service to resume in a bid to restart the economy, while also keeping in mind the huge loss incurred by the corporation in the last few months.

Even though the government has, time and again, asserted that both lives and livelihood are important, several epidemiologists believe that resumption of the metro will further increase the infection in the city.

Use of ‘Aarogya Setu App‘ for updating health status by passengers is advisable. All passengers will be required to undergo thermal screening at the entrance.

Passengers having temperature will not be allowed to travel. They will be directed to report to the nearest medical centre. Only 2-3 persons are allowed on the lift at a time.

Tokens are not available at the stations for the time being as they need frequent human interface for travel transactions and pose a risk of coronavirus infection so a “smart card is a must for travel”.

Since Delhi Metro operates in Delhi-NCR, it will not be providing services to such stations which fall under the containment zones for any given day in any of the states. State governments of Delhi, Haryana and Uttar Pradesh notify such zones on a regular basis on their websites.

If any of the stations happen to fall in such a zone, the same will also be made public through announcements at stations and trains and through social media updates. Since most of the Metro stations lie on the median of the roads, there is a slim chance for stations to fall in the containment zone as a regular practice.

In a bid to wade off people’s fear of catching coronavirus infection in closed and cramped metro compartments, the Delhi Metro Rail Corporation has modified the air conditioning system of the trains to allow 100 per cent inflow of fresh air.

Unlock 4: Health Ministry On Graded Unlock Process, “Lives Are Precious, So Does Livelihood”