PM Modi during his Independence Day speech also gave a clarion call for Aatmanirbhar Bharat, saying it is need of the hour and that India will realize this dream 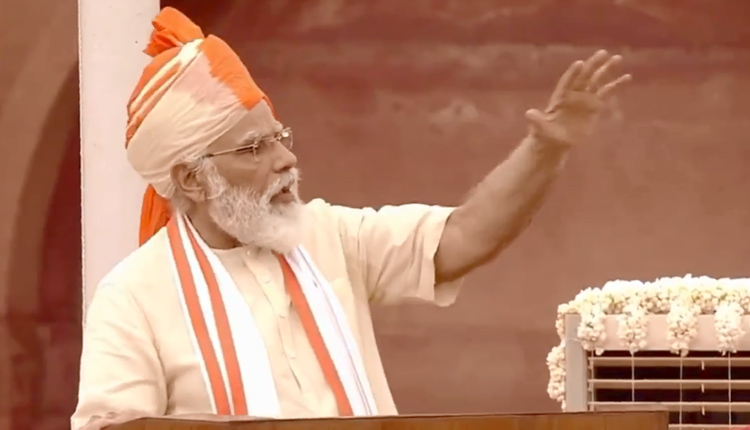 New Delhi: In the backdrop of recent Galwan Valley clash between Indian-Chinese soldiers, Prime Minister Narendra Modi on the occasion of country’s 74th Independence Day on Saturday said the respect for India’s sovereignty is supreme and Indian Army has responded from the LOC to the LAC whoever raised an eye on the sovereignty of the country.

Showing respect to the exemplary courage of Indian soldiers during the face-offs between the troops of the two countries in May-June this year in the Galwan Valley in eastern Ladakh, the Prime Minister said Indian Army has responded in the same language.

“Respect for India’s sovereignty is supreme for us. What our brave soldiers can do for this resolution, what the country can do, the world has seen in Ladakh,” Modi said referring to a violent clash in the Galwan Valley on June 15 in which as many as 20 Indian soldiers and an unknown number of Chinese People’s Liberation Army (PLA) were killed.

In his around 90-minute marathon speech, the Prime Minister said whoever has raised an eye on the sovereignty of the country, India and its Army has responded in the same language from the Line of Control (LoC) to the Line of Actual Control (LAC).

Modi said India is connecting its relations with its neighbours, whether they are connected to it on land or from the sea, with the partnership of security, development and trust.

Noting that one-fourth of the world’s population lives in South Asia, the Prime Minister said we can create untold possibilities of development and prosperity of such a large population with cooperation and participation.

“All the leaders of the countries of this region have an important responsibility towards the development and progress of this huge mass group.”

As much as India’s efforts are for peace and harmony, Modi said the more commitment it has for its security and to make its Army stronger.

“India is also fully equipped for self-sufficiency in defence production,” he added.

Prime Minister Narendra Modi during his Independence Day speech on Saturday gave a clarion call for Aatmanirbhar Bharat, saying it is need of the hour and that India will realize this dream.

The Prime Minister said now the time is to eliminate silos in the era of infrastructure and emphasized on “vocal for local campaign”.

“It is need of Aatmanirbhar Bharat. I am confident that India will accomplish this dream. I am confident of the abilities, confidence and potential of my fellow Indians. Once we decide to do something, we do not rest till we achieve that goal,” the Prime Minister said while addressing the nation from Red Fort.

Stressing on the “vocal for local” campaign, Prime Minister said, “After all, for how long the raw material from our country will be used by others to deliver us the finished products”.

The Prime Minister said, “To fulfil the Atmanirbhar Bharat dream, we need an integrated infrastructure.” For this, we have prepared a huge plan to connect the entire country through a multi-modal connectivity infrastructure, he added.

Talking about inclusive development, he said we need balanced development where everyone gets the benefits.

Modi also said India has always believed that the entire world is one family and that while we focus on economic growth and development, humanity must retain a central role in this process and our journey.

Talking about the people who have recovered from Corona, PM said, “Over 1,500 “coronavirus winners” who recovered from the disease, are present at the function as a symbol of the citizens’ determination to fight the pandemic and emerge winners.

Global COVID-19 cases: Coronavirus Cases Surpass 21 Million-Mark, US is the most infected with Coronavirus