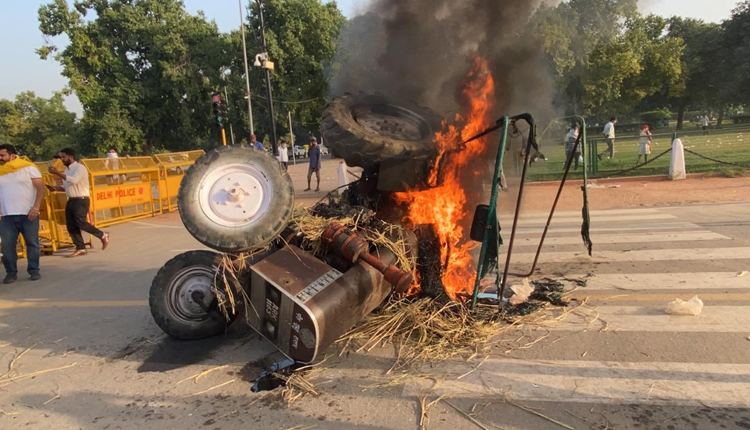 New Delhi: A day after President Ram Nath Kovind signed the Agriculture Bill’s and made them laws, the Punjab Youth Congress workers on Monday set ablaze a tractor in the high security India Gate area to protest against the contentious legislation.

About 10-15 Punjab Youth Congress activists arrived in the national capital in a truck to protest against the controversial farm laws around 7.15 a.m. on the birth anniversary of revolutionary Bhagat Singh.

The activists offloaded a tractor from the truck and set it on fire.

“If the deaf are to hear, the sound has to be very loud: Bhagat Singh,” the IYC quoted the martyr in a tweet.

“In honour of the memory of Shaheed Bhagat Singh, Punjab Youth Congress protested against the BJP government’s apathetic treatment of farmers by lighting a tractor at India Gate. Wake the sleeping govt. Inquilab Zindabad.”

It also attached a video of the act that was carried out metres away from the Rashtrapati Bhawan.

If the deaf are to hear, the sound has to be very loud: Bhagat Singh.

In honour of the memory of Shaheed #BhagatSingh, @IYCPunjab protested against the BJP govt’s apathetic treatment of farmers by lighting a tractor at India Gate.

Delhi Police spokesperson in a statement said, “Today at around 7:15 am, 15-20 persons carrying a tractor in Tata 407 vehicle came to Rajpath, Man Singh Crossing.”

The spokesperson said that they off loaded the tractor and tried to set it ablaze.

“They claimed to be members of Youth Congress Punjab. Appropriate legal action has been taken. Five persons have been detained till now and one vehicle impounded. Affiliation of these persons is being verified,” he said.

Delhi BJP media cell chief Neelkant Bakshi said that he will be filing an FIR against the Youth Congress workers.

He alleged that the Youth Congress workers brought the tractor and set it on fire to spread violence. “They are trying to spread riots in the country and I will be filing an FIR to stop this conspiracy,” Bakshi added.