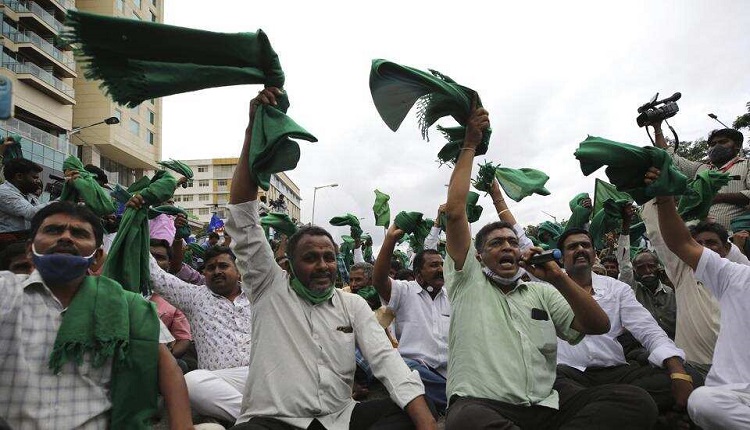 New Delhi: Farmers’ organisations have announced a ‘Bharat Bandh’ on Friday against the Farm Bills, which have been passed by Parliament. They have also decided to converge at the memorial of Lal Bahadur Shastri in Delhi on October 2 to register their protest.

The protest against the Bills in Punjab, Haryana, Uttar Pradesh, Maharashtra and other states has already spilled onto the streets in a major way.

Soon after the Bandh was announced, the police tightened the security. In the national capital, Delhi Police and paramilitary have increased their presence. More deployments have been done in areas bordering Haryana and Uttar Pradesh.

Rishipal, national president of the BKU (Ambavata), told IANS: “Almost everything is closed in our areas. Farmers have also come to the streets in Mathura and Agra regions. We will agitate till the law is taken back. Farmers from across the country are arriving at the memorial of Lal Bahadur Shastriji in Delhi on October 2.”

In Uttar Pradesh, Bihar, Punjab, Haryana and other parts of the country, farmers have also announced to take to the streets on Friday.

Farmer leader and BKU national spokesperson Rakesh Tikait said, “During the Chakka Jam, farmers’ organizations from across the country, including Punjab, Haryana, Uttar Pradesh, Madhya Pradesh, Chhattisgarh, Uttarakhand, Maharashtra and Karnataka will unite. A three-day ‘rail roko movement’ is also continuing in Punjab against the Bills.”

Cutting across party lines, day long statewide protests by farmers in Punjab and Haryana began on Friday morning against the Farm Bills passed by both Houses of Parliament.

Heavy police force has been deployed in both the states to deal with any untoward situation.

Even shopkeepers in most of the major towns in both the states shut their shops expressing solidarity with the farmers.

In a first-of-its-kind show of solidarity, 31 farmer organisations in Punjab announced a joint protest.

Several trains have been suspended since Thursday as farmers began a three-day ‘rail roko’ campaign against the Bills.

The Ferozepur Railway division decided to suspend operation of special trains till September 26 in view of the safety of passengers, a rail official told IANS.

Punjab Chief Minister Amarinder Singh has appealed to all political parties to rise above “petty considerations” and come on one platform to fight unitedly against the “treacherous” Bills that would destroy the state’s farmers.

“The Bharatiya Janata Party (BJP)-led Union Government has stooped to a new low by bringing these Bills, and that too in a totally undemocratic and unparliamentary manner,” said Amarinder Singh, adding that his government, supported by the Congress state unit, will oppose the Legislations tooth and nail in the interest of not just the farmers and the state but the entire country.

He has appealed to the farmers to strictly maintain law and order, and adhere to all Covid-19 safety protocols.

The Shiromani Akali Dal (SAD), an ally of the BJP-led NDA government, announced a statewide ‘chakka jam’ to mark their protest.

The SAD has been a longstanding ally of the ruling BJP. SAD’s Lok Sabha MP and Sukhbir Badal’s wife Harsimrat Kaur Badal had resigned from the Union Cabinet on September 17, citing her party’s opposition to the three Bills.

Interestingly, many Punjabi singers have extended their support to the ‘bandh’ call given by farmers.

Popular Punjabi singer and actor Harbhajan Mann in a tweet said he along with several other artists would be participating in the protest.

Terming the Farm Bills as a ‘revolutionary step’, Haryana BJP state chief O.P. Dhankar said these would open up multiple options for farmers to sell their produce.

The Congress on Friday made an appeal to the people to join the farmers’ agitation and oppose the Farm Bills, which have been passed by Parliament.

Congress leader Randeep Singh Surjewala said, “Nation should stand with 62 crore farmers who are protesting against the draconian law.”

He alleged that the Prime Minister has done this to help the crony capitalists, and “he does not care for the poor”.

Congress General Secretary Priyanka Gandhi Vadra said in a tweet, “This is to make farmers slaves and the farmers will become labourers in their fields and neither they will get the MSP nor respect.”

In the wake of a call for a bandh by different political partieis to protest against the passage of the three contentious agriculture-related Bills by Parliament, RJD leader Tejashwi Yadav on Friday led a ‘tractor march’ on the Patna roads.

He said that “black Bills” pertaining to agriculture had been passed.

“The Bills hold big consequences for the future of farmers. These proposed laws will paralyse the farmers as well as the entire agriculture sector in the country. The Bills were forcibly got passed by the central government in a bid to make the Indian farmers dependent on industrialists,” Tejashwi, the former Deputy Chief Minister, said while riding a tractor.

A procession of around 50 tractors followed the Rashtriya Janata Dal leader, with his party supporters shouting slogans against the NDA government over the Bills.

Members of the Karnataka State Farmers’ Association on Friday held protests at various places against the three farm Bills passed in Parliament, which however has elicited a lukewarm response so far.

Although the farmers begun a blockade since morning to register their protests at highways entry points in Bengaluru, it received a lukewarm response as vehicular movement in CBD areas was not affected much, a senior police officer said.

Speaking to reporters, farmer leader Kuruburu Shantakumar said that there are as many as 60 entry points across Bengaluru. “Our members will protest and block these entry points in order to drive home the point that the farm bills are against the interests of farmers,” he said.

Meanwhile, lack of unanimity among farmers associations came to the fore when another prominent farmer leader Kodihalli Chandrashekhar asserted that their group did not support Friday’s protest.

“We are focussing on calling for a Karnataka Bandh next Monday. We will focus on that rather than invest our energy here,” he said.

Members of some farmer organisations protested in Trichy and Tambaram in Tamil Nadu on Friday morning against the three farm Bills passed by Parliament.

Led by Tamil Nadu Farmers’ Association President P Ayyakannu, half-clad farmers held their protest outside the Collectorate in Trichy while carrying human skulls in their hands. They demanded that the Bills should not be made into law.

In Tambaram near here, farmers and members of the Communist Party of India-Marxist also protested against the Bills.

Meanwhile, Agriculture Minister R Doraikkannu said the Bills will not impact the farmers in Tamil Nadu.

Chief Minister K Palaniswami has also supported the Bills, saying they are beneficial for the state’s farmers.