PoK will wish to be part of India; will lead to fulfillment of Parliament’s resolution: Rajnath Singh 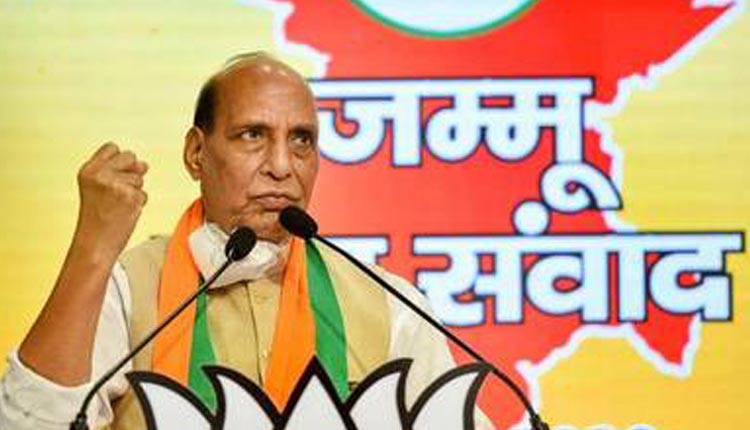 New Delhi: The Modi government will change the face of Jammu and Kashmir with its development works so much that people from Pakistan-occupied-Kashmir will demand to be part of India, Defence Minister Rajnath Singh said on Sunday.

Addressing a virtual Jan Samvad rally for Jammu and Kashmir, Singh said when people of PoK will want to be freed of Pakistan’s occupation and be part of India, then this will lead to the fulfilment of Parliament’s resolution that the region is an integral part of the country.

“Our government has been successful in sending the message that Jammu and Kashmir‘s development is its priority. Our effort in the next five years will be to change its face so much that people of PoK will feel envious. They will wish that if they were part of India, then their fate too would have changed,” he said.

“Let’s wait for what happens in future. There will be demand from PoK to be freed of Pakistan’s occupation and to live with India. When this happens, then Parliament’s resolution will also be fulfilled,” the minister said.

While piloting in Parliament a resolution for annulling Article 370 and a bill to bifurcate Jammu and Kashmir into union territories last year, Home Minister Amit Shah had reiterated that PoK and Aksai Chin, which is under China’s occupation, are an integral part of India.

Parliament has also earlier passed a resolution that Pok is part of India.

With Indian channels now including Muzaffarabad and Gilgit, which are under Pakistan’s occupation, in their weather report, this has changed “temperature” in the neighbouring country which, Singh said, is now creating more mischief, a reference to terrorism in the Valley.

Indian security forces have been giving a befitting reply, he asserted.

The defence minister described Article 370, which had given the erstwhile state of Jammu and Kashmir special status, as a “stain” which has been removed due to the courage of Prime Minister Narendra Modi.

Earlier, Pakistan’s and terrorist organisation ISIS’ flags would be seen in protests in Kashmir, now Indian tricolour is visible there, he said.

Singh said India’s global standing has increased so much that earlier most countries supported Pakistan on the issue of Article 370, while now not only other countries but even many Muslim nations have backed India.

He named Malaysia and Turkey as among the few Muslim nations which have not supported India over its move to nullify Article 370.

He cited a number of development works undertaken in Jammu and Kashmir, including the establishment of central universities and AIIMS, and said the central government has spent over Rs 2 lakh crore there in 2014-19.

Earlier, money meant for the region’s development would often be lost to corruption, and separatists and some other politicians would at times speak in favour of Pakistan, he said.

“Their back has been broken,” he said, referring to the revocation of Article 370.

The BJP under Modi has proved that it does what it says by fulfilling its nearly 70-year-old promises with “a snap of the fingers” the moment it gets an opportunity, he said.

At times even our workers felt that our party would not be able to scrap Article 370 and 35A, but this has been done now, ending discrimination against people and integrating the region fully with India, he said.

Referring to the series of virtual rallies being organised by the BJP to address people in different parts of the country by using broadcast and internet platforms, the former BJP president said Indian politics has moved into “digital world”.

The country has seen all-round development under Modi, with its economy rising and global prestige enhanced, he said, presenting a report card of the government’s works as it recently marked the first anniversary of its second term.

With critics questioning the government’s handling of the COVID-19 pandemic and the impact of lockdown, Singh said its efforts have drawn praise from organisations like the WHO.

It cannot be imagined as to what our condition would be if the lockdown was not enforced, he said.

“When Did Jammu And Kashmir Ever Belong To You?”- Rajnath Singh

Odisha To Introduce E-Learning Programme For Tribal Students From Monday