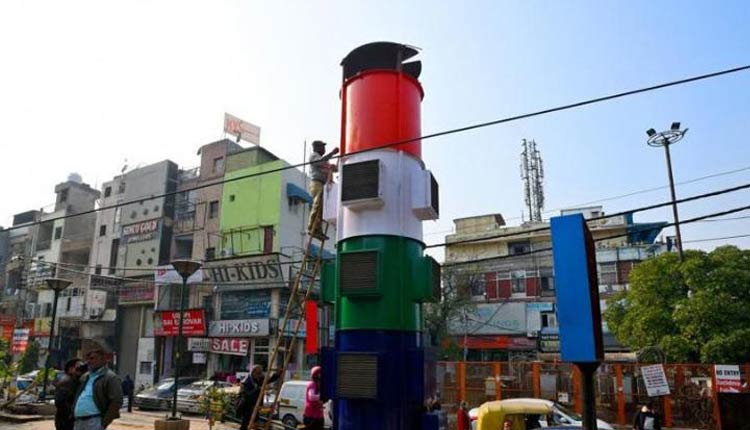 New Delhi: The Centre informed the Supreme Court Thursday that an MoU has been prepared for the installation of smog tower at Anand Vihar in east Delhi and it will be signed by the stakeholders.

Solicitor General Tushar Mehta told a bench headed by Justice Arun Mishra that after Wednesday’s hearing, the Centre contacted Indian Institute of Technology (IIT) Bombay and others, including the Central Pollution Control Board (CPCB), and the memorandum of understanding was prepared.

The top court had yesterday slammed the IIT Bombay for backing out of the project and said that it would take action against the premier institute and others for violating its order.

After Mehta informed the top court about the MoU, the bench questioned him as to why its January 13 order, directing the project to be completed within three months, was not complied with.

“When the order says that this has to be completed within three months, then why was it not complied with?,” the bench asked Mehta, who was appearing for the Ministry of Environment, Forest and Climate Change.

The bench, which said the MoU be placed on record, also posed queries regarding funds for the project and the time to complete it.

Mehta told the court setting up of the smog tower may take around 10 months time.

When he said the technology will be procured from Minnesota in the USA, the bench questioned the delay in the project and said its orders have been violated.

The court asked Mehta to file an affidavit giving all the requisite details about the project, technology and observed that it would “not tolerate” any laxity.

The bench has posted the matter for hearing on August 4.

The apex court had yesterday expressed shock at IIT Bombay’s backing out of the smog tower project and said this was “not expected of such institutions”.

It had said it was “not at all happy with the state of affairs” of the project for installing the smog tower and non-compliance with its order would be “taken seriously”.

Mehta had yesterday informed the court that IIT Bombay has backed out of the project.

In its order on January 13 this year, the top court had said that smog tower be installed at Anand Vihar and the project be completed within three months.

The top court had passed these directives while hearing the matter relating to air pollution in the Delhi-NCR.

In an affidavit filed recently in the apex court, the ministry and the CPCB has said that they had convened a meeting on July 27 with IIT Delhi, NEERI and NBCC Ltd to discuss whether they will be willing to take up the project.

NEERI, IIT-D (Delhi) and NBCC have agreed to take up the project, the affidavit has said.

Earlier, the ministry and CPCB had filed another affidavit in the court and claimed that the MoU was not finalised as IIT Bombay has not agreed to take responsibility of overall coordination of the project and verification of works to be carried out by Tata Projects Limited, which has been involved by IIT Bombay for construction, operation and maintenance of smog tower.

It had said that funds amounting to Rs 18.52 crore have been sanctioned for the project.