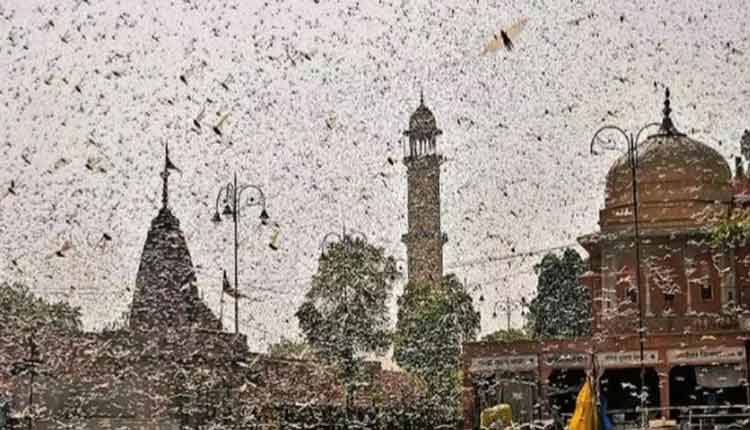 Lucknow: Several districts of Uttar Pradesh, including Jhansi, Chitrakoot, Prayagraj, Pratapgarh, Bhadohi, Azamgarh and Ambedkar Nagar, have been facing locust attacks in the past 48 hours.

In Uttar Pradesh, desert locust (Schistocerca gregaria) swarms have invaded several districts in the past 48 hours and attacked trees and crops.

The UP Agriculture Department said that the authorities of the neighbouring districts like Hamirpur, Banda, Fatehpur, Kaushambhi, Mirzapur, Sultanpur, Mau and Ballia have been asked to remain alert.

“A swarm of locusts had come to Deoria, but they descended only on the Baisila Mainuddin village. Villagers made noise and chased them away. The swarm has gone towards Kushinagar. We are spraying chemicals to kill the pests and all districts have been put on alert,” he said on Sunday.

Shahi said insecticides are being sprayed through fire department vehicles. People have been told to make a loud noise by beating ‘thaalis’ and other utensils, he said. Police sirens will also be blared and smoke would be used to chase the locusts away.

The minister said, “The UP government has given Rs five lakh to each of the bordering districts of the state for spraying chemicals to kill locusts. Apart from this, a monitoring committee has been formed in each district under the chief development officer to continuously monitor the situation.”

With the onset of monsoon in the state, Jodhpur-based Locust Warning Organisation (LWO) has intensified preparation to control the population of locusts that are hovering in the desert areas between India and neighbouring Pakistan which are now a breeding ground for the pests.

According to experts, broadly four species of locusts are found in India — desert locust, migratory locust, Bombay locust and tree locust. The desert locust is considered the most destructive since it multiplies rapidly and is capable of covering 150 kilometres in a day.

This insect, a type of grasshopper, can eat more than its body weight. One square kilometre of locust swarm containing around 40 million locusts, can eat as much food as 35,000 people in a day. They can easily affect more than 65 of the world’s poorest countries, can reproduce rapidly, migrate long distances and devastate crops and pasture.

Experts blame the growing menace of desert locusts on climate change. They say breeding of locusts is directly related to soil moisture and food availability.

After invading several districts of Uttar Pradesh and devastating crops and pastures the most dangerous of all migratory pest species in the world entered Nepal. Nepalese officials have confirmed that swarms of desert locusts have entered the country after more than two decades.

The locusts were spotted in Nepal’s southern plains of Bara, Sarlahi, Parsa and Rupandehi districts on Saturday morning, Hari Bahadur KC, spokesperson of the Ministry of Agriculture and Livestock Development, told Efe news.

The government officials, however, have not ascertained the scope of the swarms that have wreaked havoc in 60 countries.

The movement of the migratory bugs depends on the winds, and in Nepal it was blowing west to north for two consecutive days, said KC.

According to the spokesperson, the locusts could have migrated to Nepal via Varanasi in India.

The Ministry said Nepal experienced its first locusts’ attack in 1962.

However, the worst locust invasion took place in 1996 when the swarms destroyed 80 per cent of crops in Chitwan and partially damaged crops in the Makwanpur, Mahottari and Bara districts.

The arrival of the insects could deal a double blow to Nepal as it comes amid the spread of the coronavirus. Confirmed cases as of Saturday climbed to 12,309 with 28 deaths.