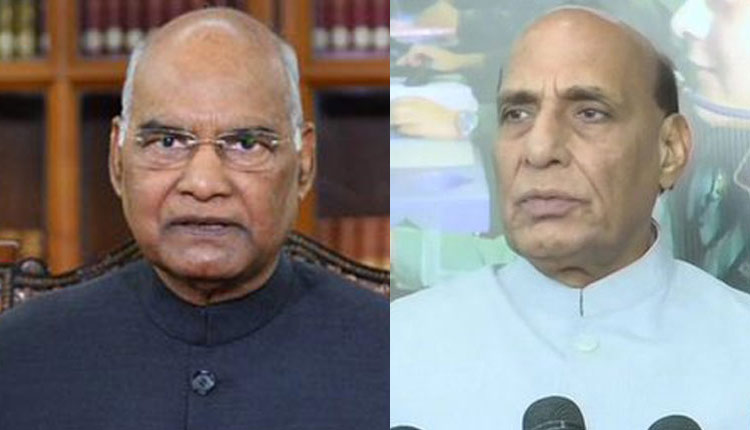 New Delhi: President Ram Nath Kovind on Friday issued a veiled warning to China on the eve of India’s 74th Independence Day, while paying rich tributes to the Indian Bravehearts who laid down their lives in the violent face-off between the forces of the two countries in Galwan Valley in Eastern Ladakh.

“Their bravery has shown that if anyone tries to create disturbance, an appropriate answer will be given,” asserted President Kovind.

He added, “The entire nation pays tribute to the martyrs of Galwan Valley. Every Indian has a feeling of gratitude towards each of their family members.”

There were 20 Indian casualties and an unknown number of Chinese troops were also killed in the violent clash.

Of the various issues President Ram Nath Kovind touched upon on the eve of India’s 74th Independence Day, two were of special significance — The Galwan face off and Ram Mandir — two events that dominated headlines, recently.

Referring to the recent ‘Bhumi Pujan’ of the Ram Temple that took place in Ayodhya on August 5, the President expressed satisfaction that the decades-long dispute was resolved amicably through judicial process.

He said, “The issue of Ram Janmabhoomi was resolved through judicial process. All concerned parties and the people respectfully accepted the verdict of the Supreme Court and displayed before the world, Indian ethos of peace, non-violence, love and harmony.”

Further, the President while addressing the nation stated, “The celebrations of IndependenceDay this year will be rather restrained. The whole world confronts a deadly virus which has disrupted all activities and taken a huge toll. It has altered the world we lived in before the pandemic.”

The celebrations of #IndependenceDay this year will be rather restrained. The whole world confronts a deadly virus which has disrupted all activities and taken a huge toll. It has altered the world we lived in before the pandemic: President Ram Nath Kovind addresses the nation

Asserting that India took actions only for self-defence and not to attack others, Defence Minister Rajnath Singh on Friday said that any enemy country attacking India will be given a befitting reply.

“Whatever we do in the realm of national security, we always do it for self-defence and not for attacking others. If the enemy country ever attacked us, like every time, we will give it a befitting reply,” the Minister said in a message to the Indian Armed Forces on the occasion of 74th Independence Day on August 15.

India is facing border tension with China on the Line of Actual Control, engaging in a three-month-long stand-off at multiple points, hitherto unprecedented on the borders.

China had changed the status quo at different places on the LAC, moving inside the Indian territories.

The minister said that history is a witness to the fact that India has neither attacked any country nor captured the land of another country. “India believes in winning hearts, not land. But this does not mean that we will let our self-esteem down,” he said in his message.

“On the eve of India’s Independence Day, I salute the indomitable courage of the brave soldiers of our Armed Forces who are selflessly serving the nation. Their unmatched courage and patriotism has ensured that our country is safe.”

He also talked about building infrastructure along the border for easy movement and mobilisation of the forces.

Dislikes for Sadak 2 Trailer Is A Wake Up Call For Bollywood Stars?

Odisha To Pay Up To Rs 18,000 Per COVID-19 Patient Per Day To Private Hospitals