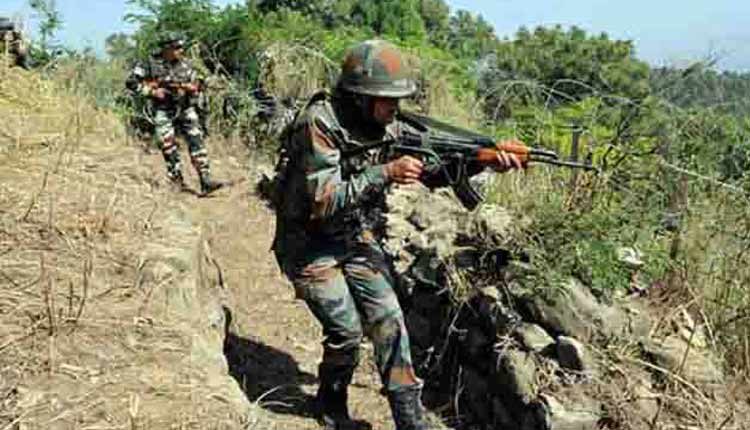 Srinagar: Five militants were on Sunday killed in an encounter with security forces in Shopian district of Jammu and Kashmir, a defence official said.

He said good drills ensured no collateral damage took place during the operation.

A police official said the security forces launched a cordon and search operation in Reban area of Shopian, in South Kashmir, this morning after receiving specific information about the presence of militants in the area.

He said the search operation turned into an encounter after militants opened fired at a search party of the forces, who retaliated.

The identity and group affiliation of the slain militants is being ascertained.

Furthermore, Army has foiled an infiltration bid along the Line of Control in Naugam sector of Jammu and Kashmir on Sunday.

On the night of June 3, a patrol team of the Indian Army along the LoC spotted a group of Pakistani terrorists trying to infiltrate into Indian territory, an army spokesperson said.

He said on being challenged, the infiltrators retrieved back under the cover of darkness and inclement weather.

“In a hurry, the infiltrators left behind their rucksacks with winter clothing, batteries and other equipment to be used for their attempted crossing of the fence,” he said.

The spokesperson said repeated attempts of infiltration in north Kashmir continue to be foiled by the alert and watchful Army units based on sound intelligence, thus blunting the nefarious designs of Pakistan to foment trouble in the Valley.

Meanwhile, Pakistani troops violated the ceasefire and resorted to unprovoked firing along the Line of Control (LoC) in Keran and Rampur sectors of Jammu and Kashmir on Sunday, the Army said.

At about 11:00 am and 12:40 pm, Pakistan initiated unprovoked ceasefire violation along the LoC in Keran and Rampur sectors of Kupwara and Baramulla districts respectively, an Army spokesman said.

He said the Army is retaliating befittingly to the Pakistani aggression and the enemy positions have been targeted with high precision.

Earlier on May 5, an army soldier was killed in action after Pakistan army resorted to an unprovoked ceasefire violation on the Line of Control (LoC) in Sunderbani Sector of J&K’s Rajouri district on Thursday night.

Army said the Pakistani aggression drew a strong response from the Indian side.

“Own troops responded strongly to the enemy fire,” an army statement said. “In the incident, Hav Mathiazhagan P. was critically injured. The soldier was evacuated to Army Hospital, where he succumbed to the injuries”.

“Hav Mathiazhagan P. was a brave, highly motivated and a sincere soldier. The nation will always remain indebted to him for his supreme sacrifice and devotion to duty,” the statement added.

Encounter breaks out between militants, security forces in J-K’s Pulwama

3 Militants Killed In Encounter With Security Forces In Pulwama