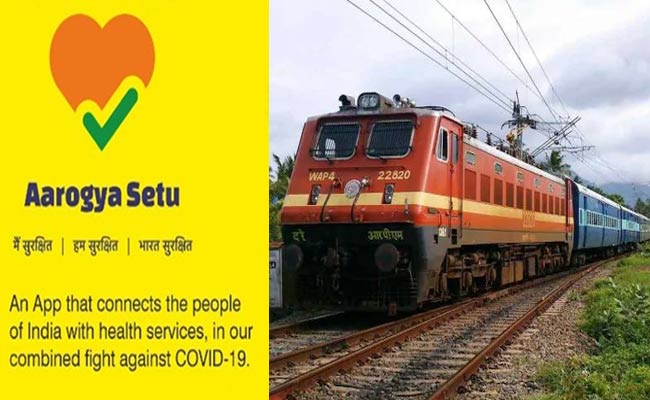 New Delhi: Even as the 15 pairs of special trains would be operated on select routes from Tuesday nearly two months after all regular passenger services were suspended by the Indian Railways amid the Covid-19 outbreak, the national transporter has made it “mandatory” for passengers to download the Aarogya Setu app.

A senior railway ministry official told IANS, “Aarogya Setu application is mandatory for all passengers travelling by the Special AC trains.” He said it has been made mandatory by the Union Ministry of Home Affairs (MHA) and the Indian Railways shared the link of downloading the mobile application on its Twitter handle on Monday night.

The railways has asked the passengers to arrive at the railway station 90 minutes prior to the departure of the train. Thermal screening of passengers will be done before they will be allowed to enter the station premises.

The official said that wearing masks has been made mandatory. Passengers have been encouraged to carry their own blankets, water and food for the travel. The national transporter has set special norms for air-conditioning inside the coaches and temperatures will be kept slightly higher than the usual. The official said that the Special trains will run at full capacity, but railway zones have been instructed to ensure that there are separate entry and exit gates at stations to the extent feasible so that there is no face-to-face movement or contact of passengers.

For now, the railways has issued a time table for trains to be run between May 12 and May 20. They will run as daily, weekly or bi-weekly trains. These trains will run between New Delhi and all major cities across the country: Dibrugarh, Agartala, Howrah, Patna, Bilaspur, Ranchi, Bhubaneswar, Secunderabad, Bengaluru, Chennai, Thiruvananthapuram, Madgaon, Mumbai Central, Ahmedabad and Jammu Tawi.

The Indian Railways has suspended the passenger, mail and express train services since March 25 amid the nationwide lockdown to combat the spread of Covid-19. Only freight and special parcel trains were running to ensure the supply of the essential items across the country. From May 1, the railways started running the Shramik Special trains to transport the stranded migrant workers, students, pilgrims and tourists from several states. Till date the railways has run over 513 Shramik Special trains and transported over six lakh people.

High Drama In Hathras: Rahul Gandhi Pushed On Ground, Detained By UP Police

2 Soldiers Killed, 4 Injured In Pak Shelling Across LoC In J&K