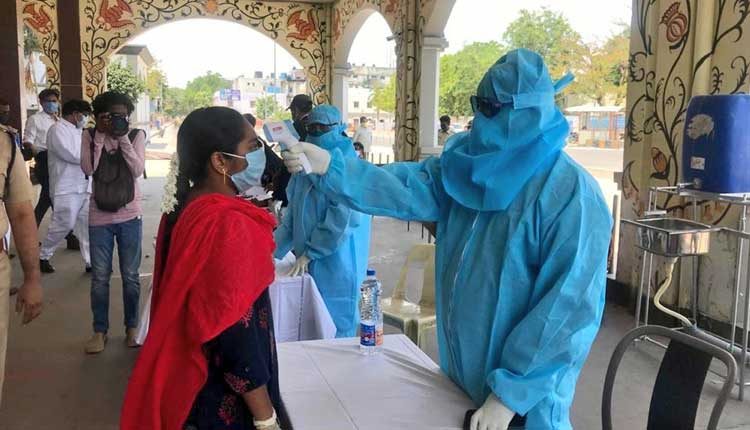 New Delhi: The death toll due to COVID-19 rose to 4,971 and the number of cases climbed to 1,73,763 in India registering a record single day spike of 265 deaths and 7,964 cases till Saturday 8 am, according to the Union Health Ministry.

“Thus, around 47.40 per cent patients have recovered so far,” a senior health ministry official said.

Of the 265 deaths reported since Friday morning, 116 were in Maharashtra, 82 in Delhi, 20 in Gujarat, 13 in Madhya Pradesh, nine in Tamil Nadu, seven in West Bengal, four each in Telangana and Rajasthan, two in Punjab and one each in Chhattisgarh, Jammu and Kashmir, Andhra Pradesh, Jharkhand, Karnataka, Kerala, Uttarakhand and Uttar Pradesh.

Himachal Pradesh, Jharkhand and Uttarakhand have registered five COVID-19 deaths while Chandigarh and Assam have recorded four deaths each so far.

Meghalaya and Chhattisgarh have reported one COVID-19 death each, according to the ministry data.

Assam health officials in Guwahati said that 168 people tested positive in the past 24 hours, highest in a single day after the first confirmed case was reported in the state on March 31.

The total patients admitted in various hospitals and medical colleges in Assam is 892, with 125 patients cured and discharged. Four patients died and three migrated to other states.

Besides, 59 positive cases have been reported in Manipur, followed by 27 in Meghalaya, 25 in Nagaland, three in Arunachal Pradesh and one each in Mizoram and Sikkim.

Assam Health Minister Himanta Biswa Sarma, Chief Ministers, health ministers and senior officials of northeastern states said that after inter-state movement through road and rail was allowed and restrictions lifted by the Home Ministry on May 4, the region, especially Assam, had witnessed a surge in coronavirus cases.

According to official estimates, little over one lakh natives had returned to the eight northeastern states, with Assam alone registering the arrival of over 60,000 returness during the past three weeks.

Meanwhile, in Itanagar, the Arunachal Pradesh Cabinet on Friday decided to outsource the sample testing for coronavirus to clear the backlog in the remote state.

A new corona case was reported in the state on Sunday a month after Arunachal Pradesh was declared coronavirus-free. The state currently has three cases, including two active cases.

In the biggest ever single day spike in Covid-19 cases in Telangana, 169 people tested positive while four more died due to the dreaded virus on Friday. Four fatalities took the death toll to 71.

The number of COVID-19 cases continued to soar in the state with 169 new cases from Thursday 5 p.m. to Friday 5 p.m. The biggest single-day jump pushed the state’s tally to 2,425. Officials said the number of active cases stands at 973.