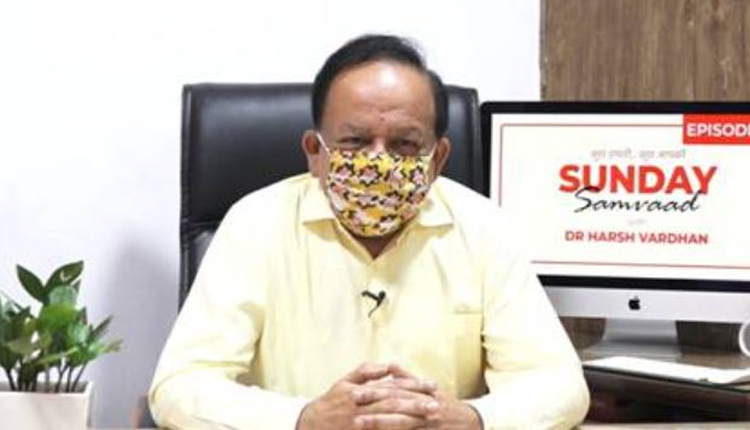 New Delhi: Sounding a note of caution, Union Health Minister Harsh Vardhan on Tuesday told the Rajya Sabha that the battle against Covid-19 is far from over, at a time when India’s total tally has neared the five million-mark.

“I would urge all Members of Parliament that the coronavirus battle is still far from over. On one hand, when we are in an Unlock stage to revive the Indian economy, and have a balanced approach, it is important that sustained community support is ensured to control the spread of the virus and break its chain of transmission,” Vardhan said in the Upper House.

He said about 40 lakh persons were under surveillance. “Extensive contact tracing of all positive cases is being undertaken regularly through disease surveillance network so as to break the chain of transmission,” he added.

Vardhan also spoke about the clinical management of coronavirus, pointing out that no specific antiviral drugs have proved effective so far while the symptomatic treatment for fever and cough, appropriate rehydration, and supplemental oxygen therapy remained the mainstay of treatment.

The Minister, however, said that in India, drug hydroxychloroquine has been re-purposed for mild and moderate cases. In addition, provisions for investigational therapies have also been made through the use of Remdesivir, convalescent plasma, and Tocilizumab for managing severe cases under close medical supervision.

India has been able to limit its cases and deaths to 3,320 cases per million and 55 deaths per million which is one of the lowest in the world, he added.

On Monday, Vardhan had said that lockdown helped prevent approximately 14 lakh to 29 lakh cases and 37,000 to 78,000 deaths. These four months were utilised to create additional health infrastructure, enhance human resources, and produce within Indian critical elements such as PPE kits, N95 masks and ventilators.

“A case in point is the increase in isolation beds 36.3 times and dedicating ICU beds above 24.6 times to what existed in March 2020. We are now self-sufficient and in position to even export PPEs,” he had added.