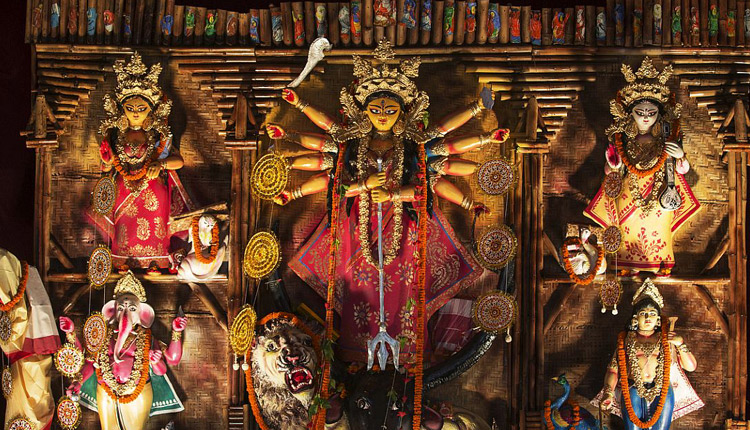 Kolkata: A day ahead of Mahasashti, the Calcutta High Court on Wednesday partially relaxed its order in which it previously declared all Durga Puja pandals as no-entry zones for visitors amid the on-going Covid-19 pandemic.

After Durgotsav Forum — an umbrella body of 400-strong Durga Puja organisers in Kolkata — appealed for a review of the order, the court on Wednesday allowed entry of up to 45 people at a time.

The high court also said that Dhakis (traditional drummers) may be permitted, not within the pandal area but in the no entry zone outside the pandal. Dhakis should wear mask and maintain hygiene and physical distancing norms.

The court directed all puja pandals to strictly maintain ‘no entry zone’ guidelines for all other purposes. It said the list of persons allowed should be decided on daily basis. These lists must be put outside the pandals every day at 8 a.m.

The directive, however, said that no other reliefs would be granted as that would have the effect of diluting the order.

The high vourt refused to pass any orders on the appeals by Kalyan Banerjee, who appeared on behalf of the Durga Puja organisers, to allow two important rituals like Anjali (offering prayers) and Sindoor Khela (playing with vermilion).

In view of the coronavirus outbreak, it said that the area will have to be barricaded and demarcated as no-entry zone except for named personnel who have to be identified by organizers in advance whose presence shall be required for performing the puja.

The order is applicable throughout West Bengal including all the pujas who have received Rs 50,000 from the Mamata Banerjee-led state administration.

All the major pujas, as referred to in the Kolkata Police Manual, are to be considered as larger pandals and shall maintain 10-meters buffer zone all around from the extremity of the pandal, the order said.

Considering the on-going Coronavirus pandemic, the high court also directed the state government to conduct awareness campaigns requesting people to maintain social distancing guidelines and appeal not to descend on streets like the regular years.