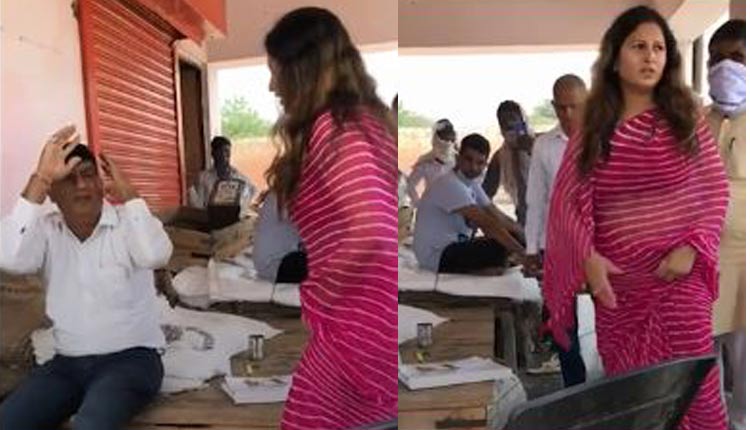 Chandigarh: A video showing Tik Tok star and BJP leader Sonali Phogat slapping a Market Committee official from Hisar and later beating him with a slipper for reportedly making derogatory remarks against her, went viral on social media on Friday.

In the video, the BJP leader from Adampur in Hisar is seen slapping the official and later hitting him with her slipper in full public view.

Phogat and others present with her are not seen wearing masks in the video, even as the Haryana government has made it mandatory to wear masks in public in the wake of coronavirus pandemic.

Sharing the video on his Twitter handle, Congress chief spokesperson Randeep Singh Surjewala said, Exploits of the leaders of the Khattar government. The BJP leader from Adampur in Hisar is beating the Market Committee official like animals.

Is doing government job a crime? Will (Chief Minister) Khattar take action? Will the media still remain silent? he tweeted.

The BJP leader, however, told media persons in Hisar that she had gone to meet the officials of the district Market Committee on Friday pertaining to some grievance of farmers.

She said an official was showing her the place in the Balsamand area of Hisar district where a shed could come up for the convenience of farmers when he started passing indecent and derogatory remarks against her.

Phogat claimed the official also made some comments against another woman official of the Market Committee and a woman minister in the Manohar Lal Khattar-led cabinet.

When he was showing me the place where the shed was to come up, he first made a mention of the community to which I belong. He also talked about another woman official and a woman minister who also come from the same community as mine, she said, adding the official then made indecent and derogatory remarks against her.

Asked why she decided to take law into her hands, Phogat hit back, What right does he (official) have to talk to a woman like this? If he would not be taught a lesson, he will not let any woman come out tomorrow.

In the video, the official beaten by Phogat can be seen saying he did not say anything wrong.

Do I work to listen to such kind of abuses from people like you? Don’t I have right to a dignified life? He used wrong language and talked in an ill-mannered way. Write a report against him, the BJP leader is seen telling other officials and her supporters present there.

Superintendent of Police (Hisar) Ganga Ram Punia told the media that they have received a complaint from the Market Committee official in which he has alleged that he was beaten by Phogat.

The official has alleged that he was beaten and a government official has been obstructed from performing his duty, Punia said.

We will take whatever action is required as per law, Punia said. Notably, Phogat had unsuccessfully contested the 2019 state assembly polls from Adampur in Hisar district, a seat which was retained by senior Congress leader Kuldeep Bishnoi.

Days before the assembly polls in October, she had courted controversy when she asked a group of people if they were from Pakistan when they did not chant ”Bharat Mata ki Jai”, at a rally in the constituency.

SSB Constable Thrashed By Girl For Misbehaving With Her In Bhubaneswar, Suspended