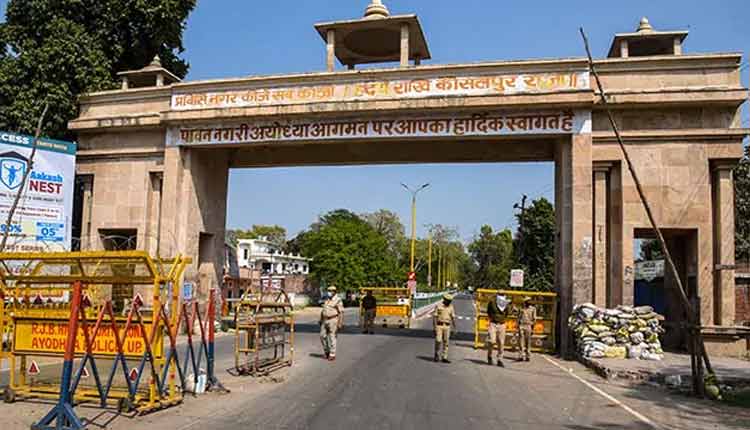 Ayodhya: With central intelligence agencies alerting the state police about possible attempts by terror groups to disrupt and sabotage the ‘bhoomi pujan’ ceremony of Ram temple by Prime Minister Narendra Modi in Ayodhya next week, all law enforcing agencies in Uttar Pradesh have been put on high alert.

Details of intel note shared with the state government say that an attempt is likely to be made by Pakistan’s ISI backed terror organisation to carry out an attack on August 5. The ISI has ordered top leadership of Lashkar-e-Taiba and Jaish-i-Mohammed to launch an attack.

The terror strike could even be a lone wolf kind of attack or a strike in a crowded place. Based on human intelligence and electronic intercepts, its being suspected that a small group of terrorists can infiltrate the country.

According to official sources, security arrangements will be at an all-time high for the ‘bhoomi pujan’ ceremony which, incidentally, coincides with the first anniversary of abrogation of Article 370. The security alert will remain in place till August 15, Independence Day.

Apart from Prime Minister Narendra Modi, several top BJP leaders including L.K. Advani, Murli Manohar Joshi, Uma Bharti and many other leaders of the RSS are also expected to be present in the program which will also be marked by the presence of top industrialists and bureaucrats from the country.

The area from the Saket Mahavidyalaya, where the Prime Minister chopper will land, to the Ram Janmabhoomi site, has already been cordoned off and residents of Ramkot locality have been issued passes for commuting.

Regular security drills are being carried out and door-to-door checking is also being done.

A senior official in Ayodhya said that security personnel will be deployed on all rooftops and drone cameras will monitor the movement in this area.

Verification of all hotels, lodges, guesthouses is underway and the entry points to the holy city are being sealed.

Driver Killed After Car Plunges Into Canal In Odisha

Air Pollution Forecast For Odisha: Smog Is Here To Stay Till…