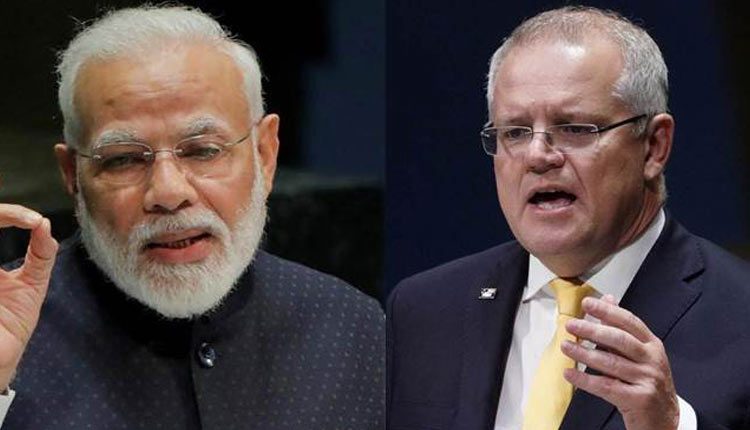 New Delhi: After both India and Australia accepted the US offer to be part of the expanded G7 meet on China, Prime Minister Narendra Modi and his counterpart Scott Morrison will hold a virtual summit on Thursday to strengthen their bilateral strategic relationship.

Sources told IANS that this is the first time that the Prime Minister of India will hold a “bilateral” online summit with a foreign leader. The focus of the virtual meeting would be to explore the possibilities of “stepping up investments and trade with each other,” sources said, adding that a number of MoUs and announcements are in the pipeline.

Prime Minister Morrison was to visit India in January and May but couldn’t first due to bush fires in Australia and now due to the coronavirus-related restrictions. As a result, the two leaders decided to hold a virtual meeting.

The meeting assumes significance in view of the Cold War-like situation that has emerged between the US and China since the Covid-19 pandemic which originated in Wuhan city of Hubei province, six months ago. The Chinese Communist Party (CCP) which aspires to re-shape the international system in favour of its ideology and interests, has been continually challenging the US-led world order.

In order to deal with China’s aggression, the US believes that the Group of Seven (G7), an international inter-governmental economic organization of the seven largest advanced economies of the world including the US, Canada, UK, France, Germany, Italy and Japan, needs to come together and also include India, Australia, Russia and South Korea.

Officials in New Delhi argue that as two democratic nations, India and Australia have developed an understanding of each other’s perspectives on regional and global issues. “We have a shared approach to a free open, inclusive, and prosperous Indo-Pacific. This has led to the convergence of mutual interest in many areas. The relations are strong not only at the bilateral level but also at the plurilateral level,” an official said.

Australia supports India’s membership of the NSG and an expanded UNSC. It has also backed India’s demand that Pakistan must take meaningful action against terror groups operating from its soil. Besides, it co-sponsored a UNSC resolution to declare Azhar Masood a global terrorist. Australia holds the view that recent developments with regard to J&K are India’s internal matter.

Officials in Delhi point out that the two nations have much in common, underpinned by shared values of pluralistic, Westminster-style democracies, Commonwealth traditions, the long-standing people-to-people ties, and sporting links. “Our economies have many complementarities with the potential to enhance bilateral trade and investment, an official said.

In 2009, the two countries upgraded their relationship to a ‘Strategic Partnership’ and in 2014, the two-way Prime Ministerial visits added momentum to the strategic partnership. Australia, in its White Paper on Foreign Policy-2017, recognised India as the ‘pre-eminent maritime power among Indian Ocean countries’ and a ‘front-rank partner of Australia’.

Overall, in the last five years, bilateral relations between both countries have strengthened and expanded tremendously. “Since 2014, they have stepped up security cooperation to include annual strategic dialogues, regular interaction between their two militaries and intelligence sharing on counter-terrorism issues,” Sameer Patil, a fellow at Gateway House said.

“The COVID-19 pandemic, U.S.-China tensions and a shared concern about China’s growing influence provide an opportunity for India and Australia to deepen their security engagement,” Patil said. The two countries, he said, can enhance their cooperation in defence technology, cybersecurity for the Indo-Pacific and investment in critical infrastructure.

But above all, Australia and India, he said, can take the ‘Quadrilateral Security Initiative’ forward. “Given the synergies and strengths of the four countries (US, Japan, Australia and India) involved, a case definitely is made to expand Quad’s focus from military to non-military but strategic issues – cybersecurity, counter-terrorism and technology including next-generation mobile communication and data transfer standards,” he added.