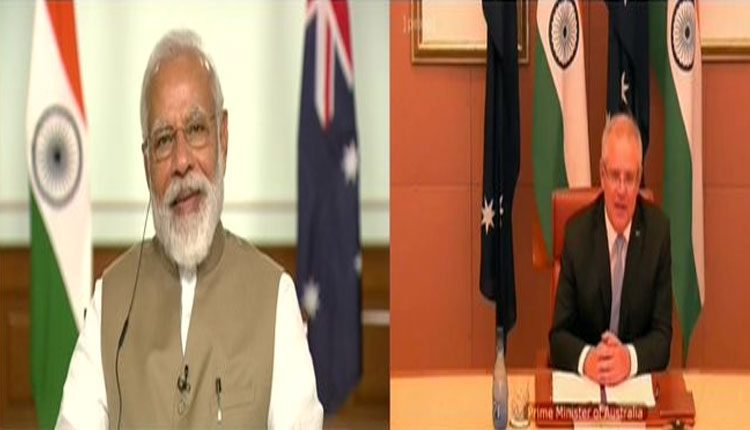 New Delhi: Prime Minister Narendra Modi on Thursday expressed his exuberance in joining the India-Australia Virtual Summit and said that people-to-people relations of both the countries are strong and the future looks bright.

After both India and Australia accepted the US offer to be part of the expanded G7 meet on China, Prime Minister Narendra Modi and Scott Morrison held a virtual summit to strengthen their bilateral strategic relationship. The summit began at 11 a.m.

PM Modi calls it a perfect time to further strengthen relations between both the nations to enhance the stability of the Indo-Pacific region & also the world. pic.twitter.com/If7habxd6f

PM Modi tweeted, “Glad to be joining the first India-Australia Virtual Summit with you, PM Scott Morrison. India-Australia ties have always been close. As vibrant democracies, from Commonwealth to Cricket to even Cuisine, our people-to-people relations are strong and the future is bright!”

Glad to be joining the first India-Australia Virtual Summit with you, PM @ScottMorrisonMP.

India-Australia ties have always been close. As vibrant democracies, from Commonwealth to Cricket to even Cuisine, our people-to-people relations are strong and the future is bright! https://t.co/SgTjD8WfjR

The Prime Minister replied to a tweet of his Australian counterpart Scott Morrison in which the latter said that he is “looking forward to catching up” with Narendra Modi for the first-ever Australia-India virtual summit.

Officials in New Delhi argue that as two democratic nations, India and Australia have developed an understanding of each other’s perspectives on regional and global issues.

“We have a shared approach to a free open, inclusive, and prosperous Indo-Pacific. This has led to the convergence of mutual interest in many areas. The relations are strong not only at the bilateral level but also at the plurilateral level,” an official said.

Australia supports India’s membership of the NSG and an expanded UNSC. It has also backed India’s demand that Pakistan must take meaningful action against terror groups operating from its soil. Besides, it co-sponsored a UNSC resolution to declare Azhar Masood a global terrorist. Australia holds the view that recent developments with regard to J&K are India’s internal matter.

Officials in Delhi point out that the two nations have much in common, underpinned by shared values of pluralistic, Westminster-style democracies, Commonwealth traditions, the long-standing people-to-people ties, and sporting links.

“Our economies have many complementarities with potential to enhance bilateral trade and investment,” an official said.