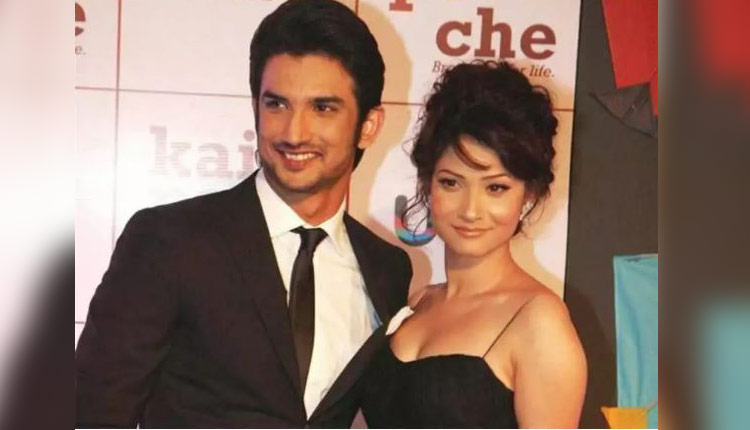 Mumbai: Bollywood star Sushant Singh Rajput’s former girlfriend, TV actor Ankita Lokhande says the actor had an admirable zest for life and she can never believe that he committed suicide because of depression.

Ankita and Sushant met on the sets of popular TV serial Pavitra Rishta and dated for over six years till 2016.

In her first interview post-Sushant’s demise on June 14, Anikta said the actor was a happy guy who never let success or failure affect him to the extent of getting depressed.

“When the news came and it was everywhere that he committed suicide, it took me a lot of time to accept it. I want to tell everyone that Sushant was not the kind of guy who will get into depression. He was not somebody who will commit suicide because he is sad.

He was a happy guy. Sushant and I have been through worse situations. I don’t know what position he was in and what was he doing, but as time passed I started trying to understand how somebody’s death is labelled as suicide But as much as I know Sushant he was not a depressed guy, the actor told Republic TV.

Sushant was found dead at his Bandra residence last month. The actor’s untimely demise was followed by a high-profile investigation by Mumbai Police during which many big names from Bollywood, including filmmakers Sanjay Leela Bhansali and Aditya Chopra, recorded their statements.

Over a month after the actor’s death, his father lodged a police complaint in Patna on Tuesday against his girlfriend Rhea Chakraborty, accusing her of abetting the suicide.

In his complaint, Krishna Kumar Singh, who had been maintaining a stoic silence over the tragic death of his 34-year-old son, also sought to invoke the provisions of the Mental Health Care Act, alleging that the “machinations” of Rhea and her family members had caused his son to crack up, despite a successful career in films, and ultimately drove him to suicide.

Ankita said it is heartbreaking when people call Sushant a depressed man because he was somebody who knew how to dream big and work towards making them into a reality.

“I have not seen a person like Sushant, a guy who used to write his own dreams. He had a diary… He had his five-year plan — what he wants to do, how he will look, etc. And exactly after five years, he had fulfilled them. And when things like depression’ are used after his name… it is heartbreaking.

He could be upset about a few things. We all get anxious, he could be anxious. But depression is a big word. Calling someone bipolar’ is a big thing, she said.

Ankita said it is hard for her to accept the narrative that he was not happy because of a few box office failures as Sushant had a lot of patience and always believed in bouncing back.

He used to say if anything doesn’t happen I will make a short film. I have seen him working so hard for himself. He was doing theatre and chose Pavitra Rishta’. He was one of the biggest stars on TV. He left the show when he was at his peak because he wanted to do something else.

“He did films. He was someone who knew what he wanted to do. To get into films, he waited for 3 years. He was sitting at home and waiting for that one break. Everybody doesn’t have so much patience, she said.

Asked about claims of financial instability leading him into depression, Anikta said, money was never on Sushant’s agenda.

“Money was a small thing for Sushant, his passion was way bigger than anything else. He always used to say, If everything ends I will build my empire again’.

“Money was never an agenda for him. His passion for life was bigger than anything. Success and failure never affected him. He believed in bouncing back. He used to find happiness in smaller things. He cannot die for this, she said.

In an interview with India Today, Anikta said she stands with Sushant’s family in these testing times and wants to know the reason behind his death.

After the FIR was lodged by Sushant’s father, Ankita had posted on Twitter a black-and-white image with “Truth Wins” written in the centre.

Commenting on her cryptic post, the actor said Sushant’s demise is a big loss and like all his admirers, she also wants to know the truth.

The actor said while she is unaware about Sushant’s relationship with Rhea, she shares a good equation with his family.

I can’t comment on Sushant and Rhea’s relationship. I was not there. As for Sushant’s family, I want to take a stand for them. They must have something to prove and show people.