Sushant Singh Rajput Has Been ‘Murdered’: 26-Point Evidence Of Swamy To Prove It 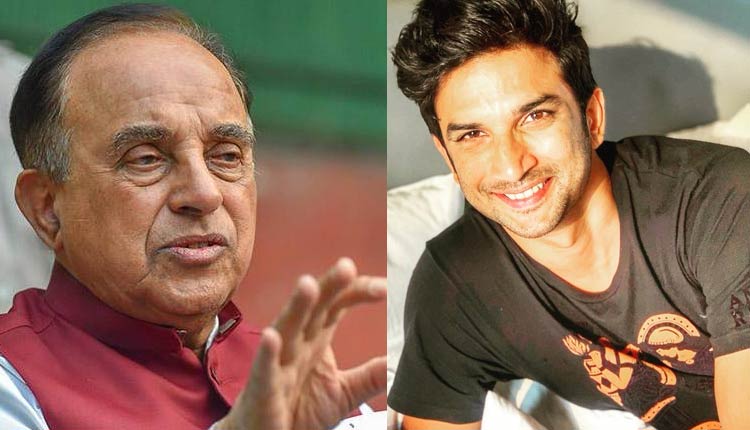 New Delhi: Subramanian Swamy, who has been advocating for Central Bureau of Investigation enquiry into actor Sushant Singh Rajput’s death, has revealed the reasons why he believes that the ‘Dil Bechara’ actor was murdered.

Dr Swamy on Thursday morning took to social media platform Twitter to share a 26-point evidence claiming why he thinks Sushant’s death was not a suicide.

Why I think Sushanth Singh Rajput was murdered pic.twitter.com/GROSgMYYwE

Among the above-mentioned list, only two points of facts that supported the suicide theory are anti-depressants found in room and SSR’s non-existence on social media. The other 24 ‘evidences’ indicate the ‘Murder theory’; however, the Mumbai Police’s investigation has not explored these points.

Speaking to Republic TV, Dr Swamy had reiterated the need for a CBI probe into Sushant Singh Rajput’s death after Rhea Chakraborty was booked on charges of abetting his suicide. The BJP MP stated the Mumbai Police had ‘dragged their feet’, and were ‘reluctant’ to get into the bottom of the case.

In this connection, the senior BJP leader tweeted, “The Mumbai Movie Mafia has decided to dump a female actress so that potentially a murder case becomes a quarrel case ( Lafhda in Mumbai Hindi) for Rs 15 crores. The female is easy to sacrifice for M3 to deflect the case.”

The Mumbai Movie Mafia has decided to dump a female actress so that potentially a murder case becomes a quarrel case( Lafhda in Mumbai Hindi) for ₹15 crores. The female is easy to sacrifice for M3 to deflect the case

Meanwhile, Sushant’s girlfriend Rhea Chakraborty on Wednesday moved the Supreme Court after an FIR was registered against her in the case. The actor’s lawyer informed that they have filed a writ petition, urging for the transfer of the investigation from Bihar to Mumbai, as the investigation in Mumbai was still pending.

Notably, Rhea and five others have been booked under charges of abetting the suicide, embezzlement, cheating, and conspiracy under Sections 340, 342, 380, 406, 420, 306 of the IPC. A four-member team of the Bihar Police had earlier arrived in Mumbai to probe the case after the FIR was filed based on Sushant’s father KK Singh’s complaint.