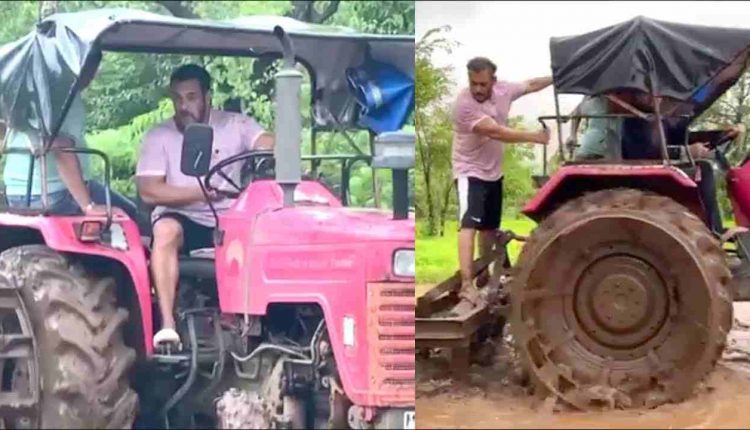 While Salman Khan must have enjoyed farming in style, sharing it on his social media account has triggered war on the platform. The video titled “Farminggg” has triggered a war of words and memes among the fans of Sushant Singh Rajput and Salman Khan. Since the death of the Kedarnath actor, fans have slammed many big names in Bollywood. Fans have argued that Salman’s alleged dislike for Sushant is one of the reasons why the Dil Bechara actor committed suicide.
Late midnight, Salman Khan shared a video of him farming on mud-drenched land. In this video, the Tubelight actor is seen plowing the land with a tractor with Sher Khan, his bodyguard alongside. It looks as if the superstar is enjoying his days doing farming. He takes the driver’s seat first and later on rides at the back of the tractor while Sher Khan replaces him as a driver. Wearing black shorts and a pink T-shirt, Salman looks like a modern farmer who does not mind getting wet and muddy doing the activity.

Sushant Singh Rajput’s Fans Slam Salman Khan’s Video
The Bharat actor has been living at his Panvel farmhouse amid lockdown. He has been sharing multiple videos and pictures related to his activities there and has kept the fans updated. But when the Bhaijan of Bollywood shared a picture of him farming a few days ago, it triggered a lot of negative reactions from the social media users. Salman Khan captioned this first picture,” Respect for the farmer.”

Respect to all the farmers . . pic.twitter.com/5kTVcVE7kt

The users trolled him but that did not stop Salman from sharing yet another picture. He captioned it “Daane daane pe likha hota hai khane wale Ka naam… jai jawan ! jai kissan ! Sushant’s fans have slammed Salman khan yet again for his new video alleging that it is all a publicity stunt.

On the other hand, the superstar has received good support from his followers.
This is what fans of Sushant Singh Rajput and haters of Salman are saying against the “Tubelight” actor:

His "respect for all the farmers" photoshoot backfired, hence comes the damage control video to show that he actual does the farming. Good PR.

And here’s how Salman fans are supporting the superstar:

Even Salman Khan was blamed for Vivek Oberoi diminshing career. But the fact is Salman never intervene in Vivek Oberoi career path. It was Aishwarya Rai who ditched Vivek Oberoi.

Actors whose careers were revived by Salman Khan:

He had helped a lot of people but never takes a bit credit for it
But get's criticised by a false blame in SSR suicide case!

This war on social media may die down soon after a couple of days. However, it has been established that Sushant Singh Rajput was also a big star who continues to get support more than a month after his death.