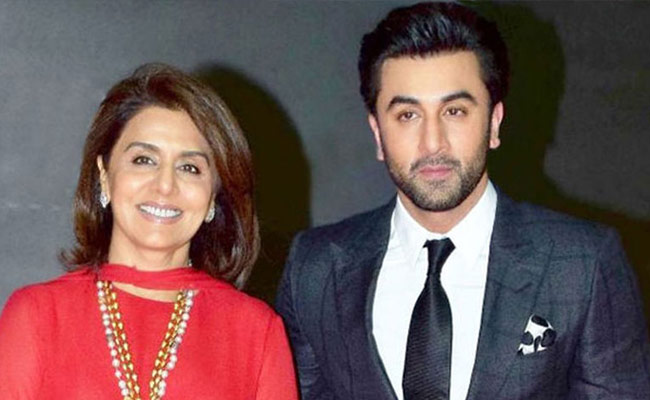 Rishi Kapoor passed away last month after battling with leukaemia for two years. Since there is a lockdown all over the country due to COVID-19 pandemic very few people were present during his cremation. It was a saddening moment for the Kapoor family especially for his wife Neetu Singh, Ranbir Kapoor, and Riddhima Kapoor Sahni.

Both Neetu and Riddhima have been sharing their memories with Rishi Kapoor through social media posts. Many old videos and interviews of Rishi and Neetu have suddenly started circulating on the internet. And one such video shows Rishiji telling media that Ranbir does not live with them. Rishi Kapoor and his wife are at an event and the paparazzi find the couple walking in with Ranbir which is why the “Akbar” from Amar Akbar Anthony movie explained.

Ranbir Kapoor is mama’s boy. They share a great bond and Ranbir has always ensured that his mother knows whatever is happening in his life-be it girlfriends or new movie projects. But very few people know that it was Neetuji who helped Ranbir take one of the most important decisions of his life. In the early days of his career, Ranbir wanted to have an independent place, so that he can live life at his own pace.

But the actor was hesitant to do the same and even was confused about whether it was the right thing to do. At that juncture, it was the Khel Khel Mein actress who insisted that Ranbir moves out of their place in Bandra and start living on his terms. The Sanju actor said in one of the interviews that he always wanted to live on his own but the idea took roots after insistence and support from his mother.

You Have Been Here Too Long, Said Neetu Singh

Neetuji told Ranbir that he should move out as he has been in his father’s house for a very long time. Although in India many families including the Bollywood ones live together as a part of a tradition, Neetu Singh wanted it differently for her son. The actress of yesteryears wanted her son to get the experience of real-life and that is why Ranbir bought his own bachelor house.

Although the Kapoor house Krishna Raj is big enough and offered a lot of personal space to Ranbir, he believes that moving out was one of the best decisions of his life. At his own home, he is the man of the house whereas at his parents’ home he would always be the son. Currently, the actor is staying with his girlfriend Alia Bhatt, and was trolled for not staying with his mother after Rishi Kapoor’s demise.

But if that’s how Neetu Singh wants there is no reason for anyone to question where Ranbir is staying.