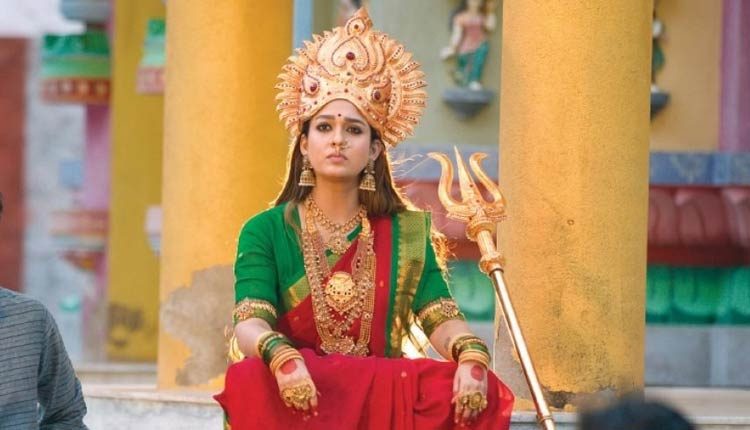 Nayanthara recently was in the news for her first look from the movie Mookuthi Amman which is being directed by RJ Balaji. The superstar of Telugu cinema has portrayed all types of roles but her stills in the form of a goddess look breathtaking and fans just could not stop themselves from appreciating them.

The crew has already completed the shooting for the movie at the start of the year but due to lockdown, the release has been delayed. Now that the lockdown is being slowly lifted, the makers want to start promoting the flick and released the first look of Nayanthara as Amman in the film. The team has started dubbing as the government of Tamil Nadu has granted permission to the film industry to start post-production work.

Nayanthara acted in all
sorts of roles!! 😍#MookuthiAmman #Nayanthara pic.twitter.com/5nVpN131YC

Earlier reports stated that the movie was a satirical comedy with humour as its main base. However, the director denied these reports and stated that it is a completely devotional film with Nayanthara in the lead. Actor Indhuja is also doing a cameo for Mookuthi Amman. Another report related to the movie that surprised many is that during the making of this flick all the star cast and production staff ate only vegetarian food.

Apart from her work, Nayanthara’s personal life is also very much on the radar. From her breakup with Prabhu Deva to her current affair with Vignesh Shivan the superstar’s personal life has always hogged the limelight. After a tumultuous breakup with Prabhu Deva, fortunately, Nayanthara has been stable with Vignesh for the last four years and the couple is expected to get married soon.

According to the latest rumours, Nayanthara and Vignesh want their wedding to be a small affair due to the current COVID-19 crisis and are planning to get married in a temple. Currently, both of them are in a live-in relationship and are now eager to seal it with marital vows.