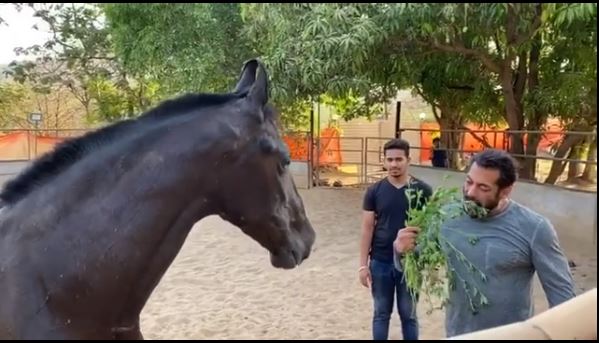 Mumbai: Bollywood superstar Salman Khan has shared a funny video where he is seen chewing leaves along with his horse! Salman shared the video on Instagram on Friday morning where is seen feeding leaves to his horse while he also munches on them!

The actor captioned: “Breakfast with my love…”

Breakfast with my love…

It seems Salman enjoyed chewing the leaves as after he finished eating them, he said, “It’s damn good ya!” The actor who is spending the lockdown period in his Panvel farmhouse, seems to be having a nice time with his animals over there.

Salman had recently shared a video where he spoke about missing his father, Salim Khan who is residing alone in their Mumbai apartment. The rest of their family along with Salman are stuck at their farmhouse in Panvel, near Mumbai amid the lockdown. In that video, Salman informed that he has not met his father since three weeks.

Salman Khan has thanked everyone for “listening and understanding” about lockdown due to the outbreak of coronavirus in India.

Salman on Thursday night took to Twitter, where he shared photographs of empty streets and a closed “qabristaan”.

“Wah ! Thank you for listening and understanding the gravity of this situation the country is in. God bless and protect each and every 1. #IndiaFightsCorona,” he captioned the image.

Wah ! Thank u for listening n understanding the gravity of this situation the country is in . God bless n protect each n every 1 . .#IndiaFightsCorona pic.twitter.com/xjHXfWA8lX

According to reports, Salman is currently staying at his Panvel farmhouse with his nephew and brother Sohail Khan’s son, Nirvaan. He is constantly in touch with his father Salim Khan via video calls.

In his video, Salman Khan urged fans to stay at home during the lockdown, adding that he can bravely admit feeling scared under the circumstances.

In the video where he features with his brother Sohail’s son Nirvan, Salman says the famous “Sholay” dialogue “Jo dar gaya woh mar gaya” does not necessarily apply in the current situation.

The actor concludes the video saying whoever is scared and stays at home will save themselves and others (from the virus). Moral of the story is “We are scared,” he added.

Be Home n Be Safe @nirvankhan15

Salman has extended help to 25,000-odd daily wage workers of the film industry whose lives have been affected by the ongoing national lockdown that has brought all filming activity in Bollywood to a grinding halt.