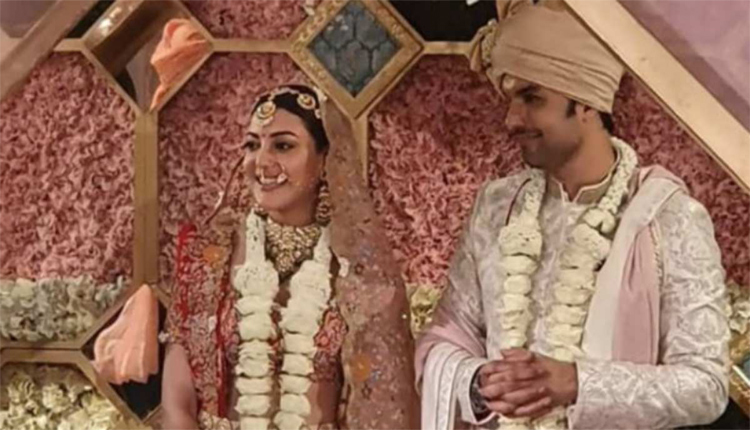 One of the most anticipated weddings of the year took place yesterday with great pomp and show. Yes! The queen of many hearts Kajal Aggarwal finally tied a knot with her long-time beau Guatam Kitchlu. The pictures of the wedding have surfaced online and now the fans can’t keep their calm.

The couple looked like a match made in heaven when the inside pictures of the duo posing together after the wedding rituals surfaced.

The wedding took place at The Taj Mahal Palace hotel and was reportedly a low-key affair. While Gautam kept it classic in a white sherwani, Kajal looked breathtaking with a traditional red lehenga.

The wedding hall looked gorgeous as it was decked up with hundreds of pink and white flowers that complimented the couple’s attire.

Just before the wedding, the Singham actor took to Instagram to share a pre-wedding picture with her bridal lehenga which she captioned. ‘Calm before the storm’. Numerous actor including Rakul Preet, Sonu Sood, and Tamannaah sent their love and wishes to her in the comments section.

Calm before the storm 🤍#kajgautkitched

Earlier the pictures of the couple from the Haldi and Mehendi ceremony was also circulated on the internet by the actor’s numerous fan clubs.