Deepika Padukone Hints At Collab With Vijay Through This Video? Watch

The trend of North and South Indian film industries joining hands is at an all-time high. The new generation of stars is going for the ‘Pan-India’ film trends to reach…

Exclusive Latest Update: Cyclone Jawad To Miss Odisha Coast By A Whisker, Will Weaken On Sunday

The trend of North and South Indian film industries joining hands is at an all-time high. The new generation of stars is going for the ‘Pan-India’ film trends to reach a bigger audience. While many stars have already joined the trend, Deepika Padukone is also not far behind. Recently, buzz of her collaborating with Thalapathy Vijay took over the internet.

In DeePee’s latest reel video, she is seen to be giving her own take on the hit song Vaathi Coming. The song is from Tamil superstar Vijay’s movie Master that has become a chartbuster. The Bollywood diva incorporated the song into her reel that made the fans curious if she is hinting at a possible collaboration with the Thalapathy.

In the video captioned as “BTS of BTS!”, the actress asks first if one montage of her walking is enough, then several walking scenes are edited together in various outfits. While most were loving the South twist to her reel, few BTS Army also marked their attendance in the comments section as they thought the caption was related to their idol band. 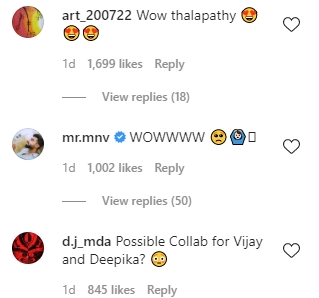 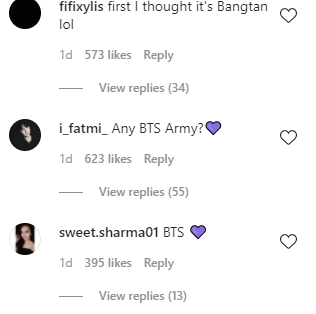 Over the next months, the audience will witness North and South stars coming together. From Vijay Deverakonda stars with Ananya Panday in Liger to Alia Bhatt and Ajay Devgn in RRR with Ram Charan and Jr NTR, the list keeps getting longer.

Deepika Padukone is also caught up with the trend as she has teamed up with Prabhas and Amitabh Bachchan for her Telegu debut. Directed by Mahanati fame Nag Ashwin, the film remains untitled till now.