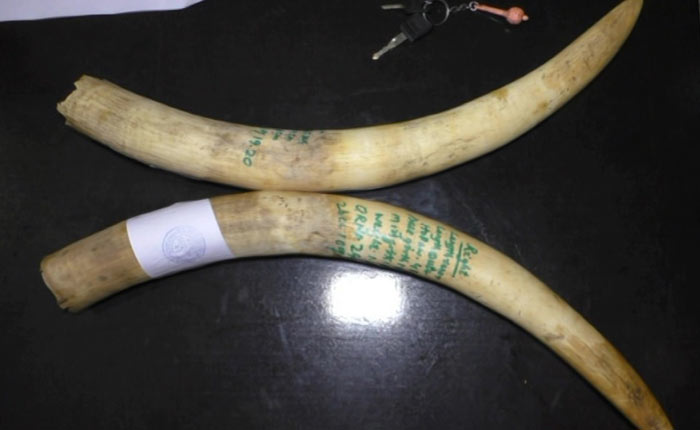 Sonepur: Forest department officials on Saturday arrested two more persons for their alleged involvement in the 2019 elephant poaching case in Sonepur. The accused have been identified as Suresh Karna and Kalia Karna of Meghanand village in the district.

Moreover, two tusks weighing nearly 3 kg have also been recovered from their possession.

According to reports, the district forest officials nabbed the two miscreants by setting a trap.

“We apprehended the two accused by posing as customers and recovered the ivory which was buried after the poaching of elephant at Sarasda area in November 19, 2019,” said Sonepur DFO, Sushant Samantara.

Samantara further informed that the carcass of elephant with both tusks missing was earlier recovered from the forest. Later, after a probe, three persons were detained on suspicion.

Following interrogation of the suspects, two accused were arrested and subsequently four others were also nabbed.

“So far, we have arrested eight persons involved in the elephant poaching case. Our probe is underway as several other accused are still absconding,” Samantara added.

In another incident, a poacher was arrested by wildlife personnel on charges of killing 10 birds in Ganjam district on February 3.

The poacher, identified as Bamadeb Polai (23) of Sipia, was arrested by the wildlife personnel near Nairi when he was reportedly carrying the birds after killing them. The birds included eight northern shovelers and two large welsh ducks.

On January 24, the forest officials had reportedly seized 19 birds of different species from the possession of poachers. Of them, seven were dead, while 12 were live birds. The birds were seized near Titia jetty under Nuapada wildlife range.