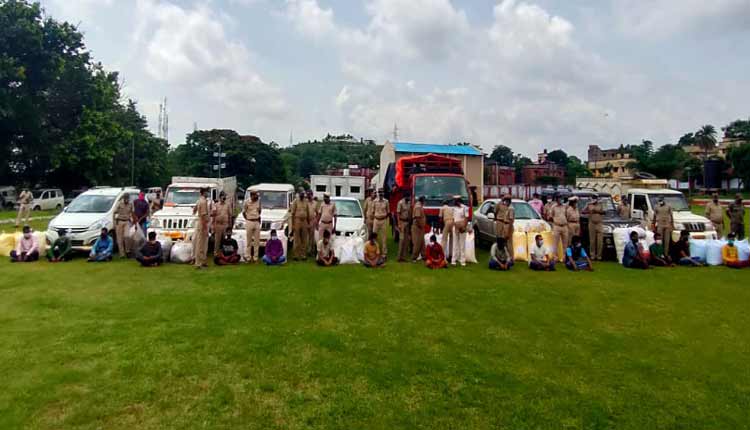 Bhubaneswar: A lot of youngsters are now getting attracted towards Ganja (dry cannabis) peddling as it is seen as a lucrative trade, said Koraput SP Mukesh Kumar Bhamoo.

Due to its geographical location, Koraput district is fast turning into a safe haven for illegal Ganja trade as the narcotics substance is being trafficked to various parts of the State as well as Bihar, Chhattisgarh, Andhra Pradesh West Bengal and other northern States including Delhi. Besides Koraput, there has been an increase in Ganja peddling in Malkangiri district, Bhamoo said.

“A massive crackdown was launched and 25 persons including transporters, middlemen and suppliers were arrested,” informed Koraput SP while talking to reporters after seizing a major haul of nearly 1,700 kilograms of ganja on June 25.

Raids were conducted at Sunabeda, Semiliguda, Pottangi, Boipariguda, Machkund and Jeypore Sadar police station areas. Police also seized 10 four-wheelers in which the Ganja was being smuggled on Thursday- on the eve of the International Day Against Drug Abuse and Illicit Trafficking, he said.

According to the SP, the district police has seized 25,462 kilograms of ganja and arrested over 200 persons for smuggling the contraband in the last 10 months.

“We have got many vital information and we will bring the accused on remand for further investigation into the case,” said Bhamoo adding that no political link has come up so far during preliminary probe.