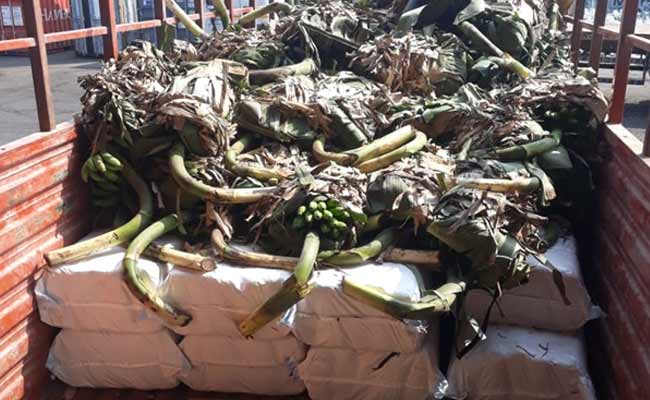 Vishakhapatnam/Bhubaneswar: In a major haul, a consignment of 1, 638 kg of cannabis worth Rs 2.45 crore being illegally transported to Bhubaneswar from Vishakhapatnam in a goods carriage was seized and four persons were arrested by the Directorate of Revenue Intelligence (DRI), Vishakhapatnam on Wednesday. The identification of the arrested persons is yet to be known.

Later, the officials searched the goods carriage vehicle and found 40 bags concealed under a load of banana stalks. The bags were stuffed with 800 packets of brown packets containing ganja. The DRI officials also arrested four persons for their involvement in the transportation of the cannabis.

Sources said, the contraband consignment was loaded in the vehicle near Narsipatnam on February 26 and handed over to the driver near Anakapalle the same day. The contraband item was reportedly procured from Vishaka agency area and was being transported to Bhubaneswar.

The said item was detained under the provisions of Narcotic Drugs and Psychotropic Substances (NDPS) Act, 1985. Meanwhile, the DRI has also seized the vehicle and further investigation into the case is on.