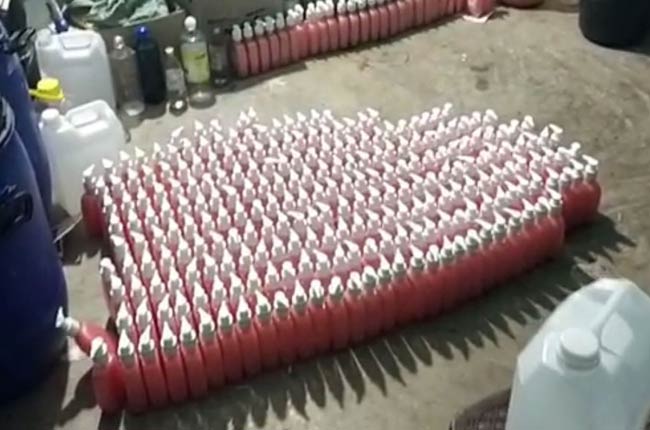 Bhubaneswar: A joint team of Directorate of Drugs Controller and Special Task Force of Commissionerate Police busted a fake handwash and sanitizer manufacturing unit in Jharpara area of the capital city here on Monday.

Acting on a tip-off, Drugs Inspectors Sudarsan Biswal, Prabesh Kumar Lenka and Chandan Kumar Giri along with a team of Special Task Force conducted a raid at the S.S Industries in Jharpara area and busted the manufacturing unit.

A huge quantity of raw materials which were used to prepare the handwash and sanitizers were also seized during the raid. The estimated value of the seized raw materials is expected to be around Rs 3 lakh.

During interrogation, the joint team came to know that the unit was manufacturing the handwash and sanitizers for the last several days without any license. Besides, it has already circulated some of its products in the market.

According to sources, the unit had obtained license to manufacture some cleaning chemicals. However, it started to prepare the handwash and sanitizers taking advantage of their growing demands due to coronavirus (COVID-19) outbreak in the State.

While the S.S Industries was sealed following the raid, a case has been registered against its owner on charges of violating the Drugs & Cosmetics Act & Rules.

Amid the spread of COVID-19, Odisha government had earlier this month issued a warning to take strict action against those found involved in hoarding and black marketing of protective masks, handwash and sanitizers.

On March 14, the Union government had declared face masks and sanitizers as essential commodities till June 30, 2020 as it stepped up efforts to boost supply and prevent hoarding of these items in its fight against coronavirus.

This apart, the Centre also invoked the Disaster Management Act with an aim to ensure price regulation and availability of surgical and protective masks, sanitizer and gloves.