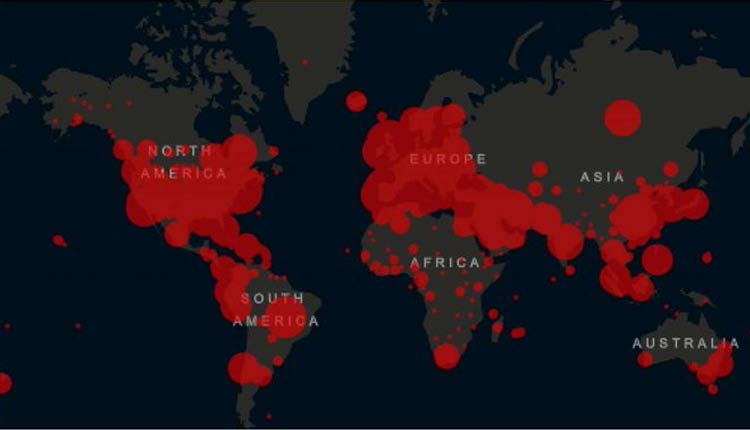 The COVID-19 pandemic has brought the world to a standstill. Here are the latest updates on the coronavirus crisis from around the globe on Tuesday.

The number of global confirmed COVID-19 cases has topped 8 million, reaching 8,003,021, according to data compiled by the Center for Systems Science and Engineering at Johns Hopkins University.

A total of 435,619 people worldwide have died of the disease, the data showed on Monday, Xinhua reported.

Countries with over 200,000 cases also include Brazil, Russia, India, Britain, Spain, Italy and Peru, according to the Johns Hopkins tally.

The number of COVID-19 cases in the US topped 2.1 million on Monday, reaching 2,100,749, according to the Center for Systems Science and Engineering at Johns Hopkins University.

Meanwhile, the national death toll reached 115,827, according to the tally, Xinhua reported.

Other states with over 100,000 cases include New Jersey, California, Illinois and Massachusetts, the tally showed.

By Monday, Beijing had reported 526 confirmed domestically transmitted cases, including 411 who had been discharged from hospitals after recovery and nine deaths, Xinhua reported.

There were still 106 patients receiving medical treatment, and 10 asymptomatic cases were under medical observation.

So far, 174 imported cases have been reported in Beijing, with one still hospitalized.

US partially ends HCQ, CQ use for COVID-19

The US is partially stopping the use of hydroxychloroquine (HCQ), which President Donald Trump personally obtained from India, and chloroquine (CQ) to treat COVID-19, suspending it in hospital settings but allowing it elsewhere under doctor’s care.

The US Food and Drug Administration (FDA) said on Monday that it was withdrawing the emergency use authorisation (EUA) for treating coronavirus patients in hospitals with the two politically controversial anti-malarial drugs because data showed they “are unlikely to be effective” and had “serious side effects”.

But Health Secretary Alex Azar clarified that the FDA ruling was limited to hospital use with “the most extreme cases” and the medicines have not been completely banned and doctors can continue to prescribe them.

“We continue to study in out-patient settings, as well as preventive. That data is not yet in,” he added.

When President Donald Trump was asked about the FDA decision by reporters at the White House, he deferred to Azar, who said: “If a doctor wishes to prescribe it, working with a patient, they may prescribe it for any purpose that they wish to do so.