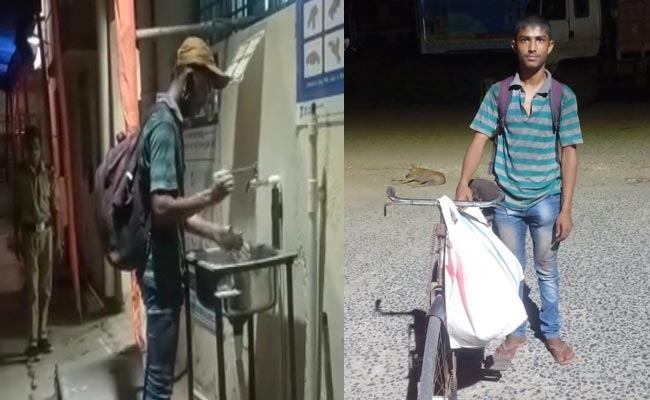 Bhubaneswar: If the countrywide lockdown in the wake of coronavirus outbreak has hit any section of people the worst, it has to be the daily wagers. The pandemic which has now infected more than 6000 people across the country has left scores of migrants jobless triggering unbelievable stories of homecoming, be it instances of people seen riding in milk tankers, cycle rickshaws and even walking hundred miles.

Believe it or not, 20-year-old Maheswar Jena reached his native Bhanra village under Binjharpur block of Jajpur district in Odisha Tuesday evening by cycling over 1,300 kilometres from Maharashtra‘s Pune.

Jena was reportedly engaged in a private company in Maharashtra but he was rendered jobless after the nationwide Covid-19 lockdown was announced. He tried to manage with the little money he had but when sustenance became difficult, he made up his mind to return to his homeland- Odisha.

That same night, he arranged an old-bicycle and left for his hometown. He reportedly cycled for eight days and eight nights to reach Binjharpur Sadar block on Tuesday evening.

Moments later, a few officials of the district administration rushed to Jena and shifted him to a quarantine centre in a school at Abdalpur near his village.

Jajpur Block Development Officer, Saurav Chakraborty said, “After receiving information, our medical team reached the village and shifted him (Jena) to the quarantine centre. We have done his preliminary health check. Though he does not have any Coronavirus-related symptoms, he will be in quarantine for 14 days as a precautionary measure. If everything goes well, he will be sent to his home.”

“Jena will be provided with dry food and cooked food two times a day. Adequate arrangements have been done in the quarantine centre and there will be no problem for him. Jena and his family members are also cooperating with us. I request people to inform us in case they come across similar cases. Social distancing and quarantine are the two main measures to tackle the spread of COVID-19,” added the BDO.

On the other hand, a burka-clad woman from Telangana rode 1,400 km on her scooty to bring back her son stuck in Andhra Pradesh.

Braving all the odds, the school teacher from Bodhan town travelled on the two-wheeler to Nellore district and brought her son back.

Razia Begum had to embark on the arduous journey as her son Mohammed Nizamuddin was stuck in Rehmatabad in Nellore district for nearly two weeks.

Nizamuddin, a student of Intermediate Second Year (12th standard) at a private college in Hyderabad, had gone to Rehmatabad along with his friend after their annual exams. He, however, was stranded there due to suspension of all public transport and imposition of lockdown.

Worried over the wellbeing of her son, Razia Begum decided to undertake the long journey to bring him back. Razia, who serves as headmistress at a primary school, approached Assistant Commissioner of Police V. Jayapal Reddy and obtained a permission letter from him.

She left for Rehmatabad in the morning of April 6. Though she was stopped by the police at many barricades and checkposts, she produced ACP’s letter and persuaded the police officers to allow her to continue the journey.

Someone who had never stepped out of the town on scooty, succeeded in reaching Rehmatabad the next day with the help of Google maps and support of locals along 700-km.

“I stopped at the check-posts to take some break and then continued my journey,” said the woman, who has two sons and a daughter.

She picked up her son and left for Bodhan on the evening of April 7 and reached home the next day. The distance was long but the concern and love for her son made the task easy. “If you have the determination you can achieve anything,” she said.