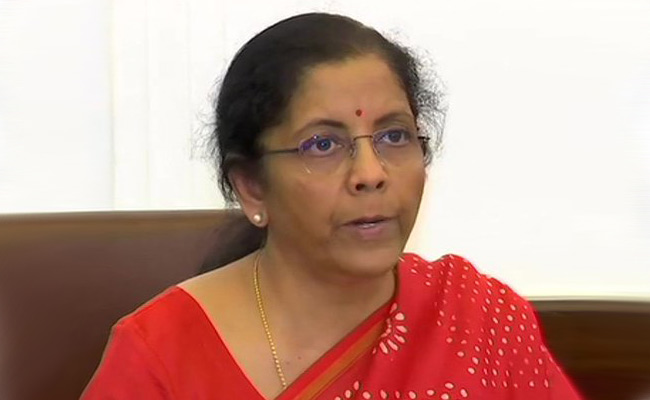 She further said that companies that have a turnover of less than five crore, no interest, no late fee, and no penalty will be charged. Companies with turnover of above Rs 5 crore will not have to pay any late fee or penalty but will have to pay a 9 per cent interest rate for late filing of GST.

“I want to underline that the date for opting for composition scheme is also extended to June 30, 2020,” she said.

The minister has announced the extension of the deadline for filing income tax returns for the financial year 2018-19 till June 30, 2020 in a bid to provide relief amid the coronavirus crisis.

Sitharaman also said that the government has reduced the interest rate on delayed TDS deposit to 9 per cent from the previous 18 per cent.

Furthermore, in a major relief for small and medium enterprises, the central government has raised the threshold for default under the Insolvency and Bankruptcy Code (IBC) to Rs 1 crore from the current Rs 1 lakh. Addressing the media, FM said that the decision has been taken to prevent triggering of insolvency proceedings against MSMEs.

She assured that the government will keep a watch on the situation and if the situation remains the same beyond April 30, the government may consider suspending Sections 7, 9, and 10 of the IBC for six months. This will prevent companies from being forced into insolvency proceedings in such force mejuere causes of default.

Announcements on the credit situation, EMIs, NPAs will be made at a later point of time: FM Nirmala Sitharaman pic.twitter.com/sUTghte8KV

As per the other announcements made by the Finance Minister, debit cardholders, who withdraw cash from any bank ATM, can do it free of charge for the next three months.

” …so you may have a debit card from a bank, a particular bank, but you will now be allowed, without additional charges, to draw cash from any other bank’s ATM for the next three months,” the Finance Minister said.

Also, the minimum balance requirement fee has also been withdrawn meaning that an account holder would be permitted to bring down balances to almost zero without banks charging fee for that. At the moment this will apply for three months, the Minister informed. It will be applicable for accounts of all banks.

For the trading community, bank charges will be reduced for digital trade transactions for all trade finance consumers.

She further stated that, RBI and Finance Ministry are monitoring the volatility in financial markets and SEBI has come out with guidelines to ensure that transactions are properly monitored.

The decision comes amid the coronavirus scare and total lockdown across 30 states and union territories in India. Businesses across the country have been severely hit and are likely to face financial losses due to the lockdown. Micro, Small and Medium Enterprises are likely to be more affected due to limited capital reserves.

The government may come up with an economic package to prevent the COVID-19 pandemic from causing major harm to the economy. FM said as a first step they were addressing the compliance-related issues and an economic package covering issues of concern to the industry would be announced separately later.

“The economic package is going to be announced soon,” Sitharaman said while announcing a set of compliance-related issues including the extension of dates for filing IT and GST returns.

Earlier in the day the FM gave an indication about the package in a tweet.

“Even as we are readying an economic package to help us through the corona lockdown (on priority, to be announced soon) I will address the media at 2 pm today, specifically on statutory and regulatory compliance matters Via video conference,” said the tweet of the finance minister.

The government even has provided a big relief to the corporate sectors on compliance-related issues particularly related to the incorporation of businesses and qualifications of directors.

As per announcements made by the FM Sitharman, a company has now been given six more months to file a declaration of commencement of business. At present, such declaration has to be made within six months from incorporation.

Directors of Indian registered companies have also been freedom from compliant with residency rules that mandates them to be in India for a minimum period of 182 days.

The government has also decided to give more flexibility to companies over the need to create a deposit reserve from 20 per cent of the deposits maturing in FY21 by April 30. This requirement can now be met by June 30.

Also, companies have been given time till June 30 to invest 15 per cent of debentures maturing during a year in specified instruments. The date of compliance for this earlier was April, 30.

Indian economy that had already slowed down before the outbreak of coronavirus pandemic, is in for a more difficult period in coming months with businesses almost coming to a standstill. Finance ministry and the RBI have taken several steps to ensure liquidity in the system remains intact. But the industry has called for more stimulus to fight depression-like conditions setting in the economy.

COVID-19: $20 Trillion Lawsuit Filed Against China In US Over Coronavirus Pandemic

Railway Seeks Relaxation Of Lockdown For Employees In Odisha